According to the results, 74% of “non-parent” in Italy plan to have children in the near future, and 45% would like to have them in the next two years. Among the reasons: the desire to build a family. And what about Covid19? A disincentive, but for a minority of the interviewees. Furthermore, the dynamics and balance between children and career concern women above all. These are some of the evidences that emerged from the Observatory of Contemporary Families, a research conducted by BVA Doxa for Prénatal Retail Group, which investigates the propensity to parenthood of 25-40-year-olds.

In 2020, the birth rate in our country reached an all-time low level since the unification of Italy. There were 404,104 new borns, down 3.8% compared to 2019 (source ISTAT). BVA Doxa investigated for Prénatal Retail Group, with its Prénatal, Toys Center and Bimbostore brands, the propensity to parenthood in the study “Observatory of Contemporary Families”, involving a representative panel of individuals between 25-40 years of age, non-parents, equally divided among men and women and distributed geographically (North, Center, South and Islands).

FUTURE PARENTS’ PROFILE AND EXPECTATIONS – Overall, 74% of the current “non-parents” plan to have children in the near future, 45% would like it in the next 2 years. To say this are mainly those interviewed between 30 and 40 years old and currently employed. A greater propensity among women (51%) and residents of Central Italy (51%). When asked about the number of children they want, 46% would like 2. In addition, 26% would like to raise their children in a small to medium-sized city. The dream of 38% – of which 52% reside in the South and Islands – is to live by the sea, while 32% of respondents think that the budget to be allocated in the first three years of a child’s life is between € 3,000 and € 6,000 per year. Diapers and body care represent the most significant item of expenditure (36%), followed by food and food expenditure (32%), while growth and entertainment (courses, playrooms, toys) account for 1%.

CHILDREN AND PERSONAL ASPIRATIONS – Among the reasons why 74% of respondents say they want a child there are the desire to build a family (27%) and the desire for motherhood / paternity (20%). The reasons that instead would make 26% not to want children are economic and job instability (18%) and not having a stable partner (14%). For 52% of the interviewees, children represent an enrichment, the greatest joy, and 37% believe that having children is important for the future of the country. On the other hand, 30% argue that the lack of concrete help for families is a deterrent.

THE COVID19 FACTOR – For 54% of respondents, the current pandemic situation from Covid19 represents a disincentive to have children. This is said above all by residents in the North West (66%) where the pandemic, especially in the first wave, had a significant impact, and by women (59%), particularly affected also in terms of employment. General uncertainty (66%) and socio-economic uncertainty (64%) drive the fears of the interviewees for whom the fear of the health situation (52%) is greater than that of losing their job (42%). Moreover, 38% reiterate that the lack of help on which to rely remains a discriminating element in the choice not to have children.

In this context, Covid-19 influenced the choice of having or not having children only for 19% of the interviewees (both among those who wanted them before and don’t want them anymore, 7% – and among those who did not think about it before and now would like 12%). In addition, 46% still  want them and 22% remain convinced that they will not have children.

MORE FLEXIBLE JOBS MIGHT HELP FUTURE PARENTS – For more than a year, working from home has been a reality for many Italians. The use of flexible work within companies could affect the propensity to have children for 84% of respondents, who agree with this statement (21% very much, 63% quite), although right now, 44% believe few companies will actively engage.

CHILDREN AND THE DESIRE TO PURSUE A CAREER: A WORRY FOR MANY WOMEN – Children represent an obstacle to a career, especially for women: 84% of the interviewees are convinced that a child influences “a lot and enough” in the professional career, compared to 28% of men. In this regard, if 36% of men say that having a child is not an obstacle in working life at all, as many as 54% of women are convinced that a child has no impact on work for men. 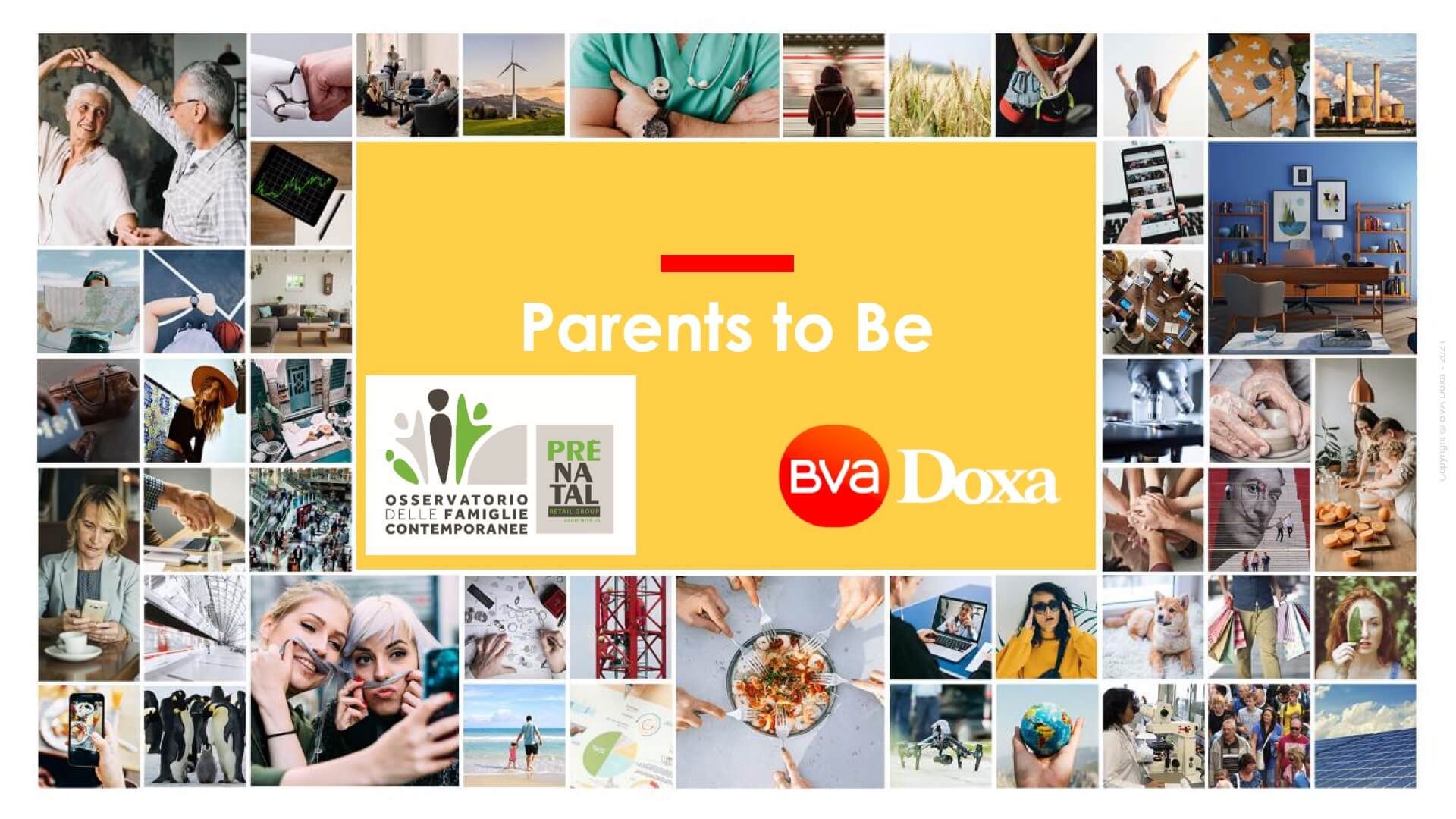 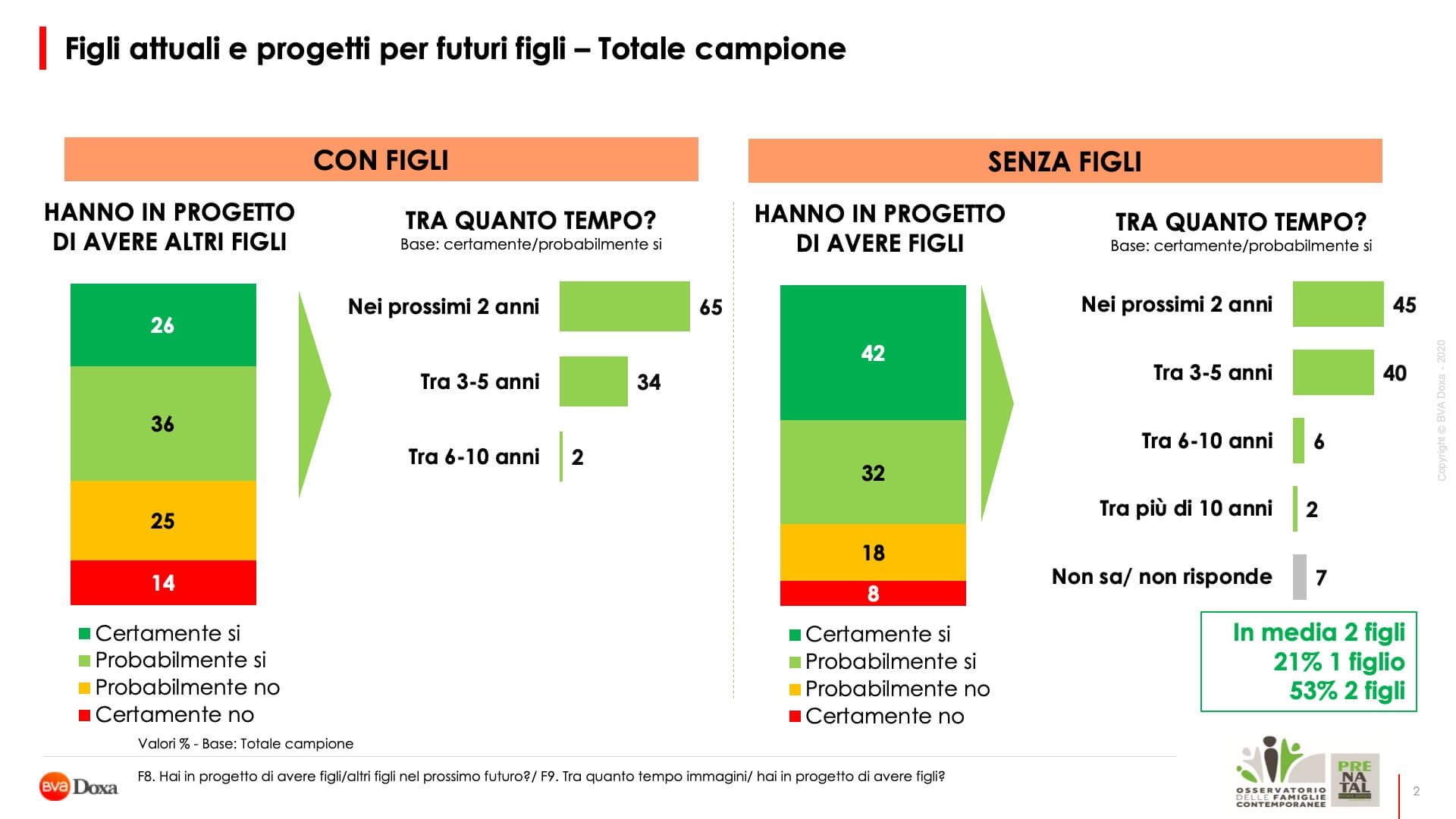 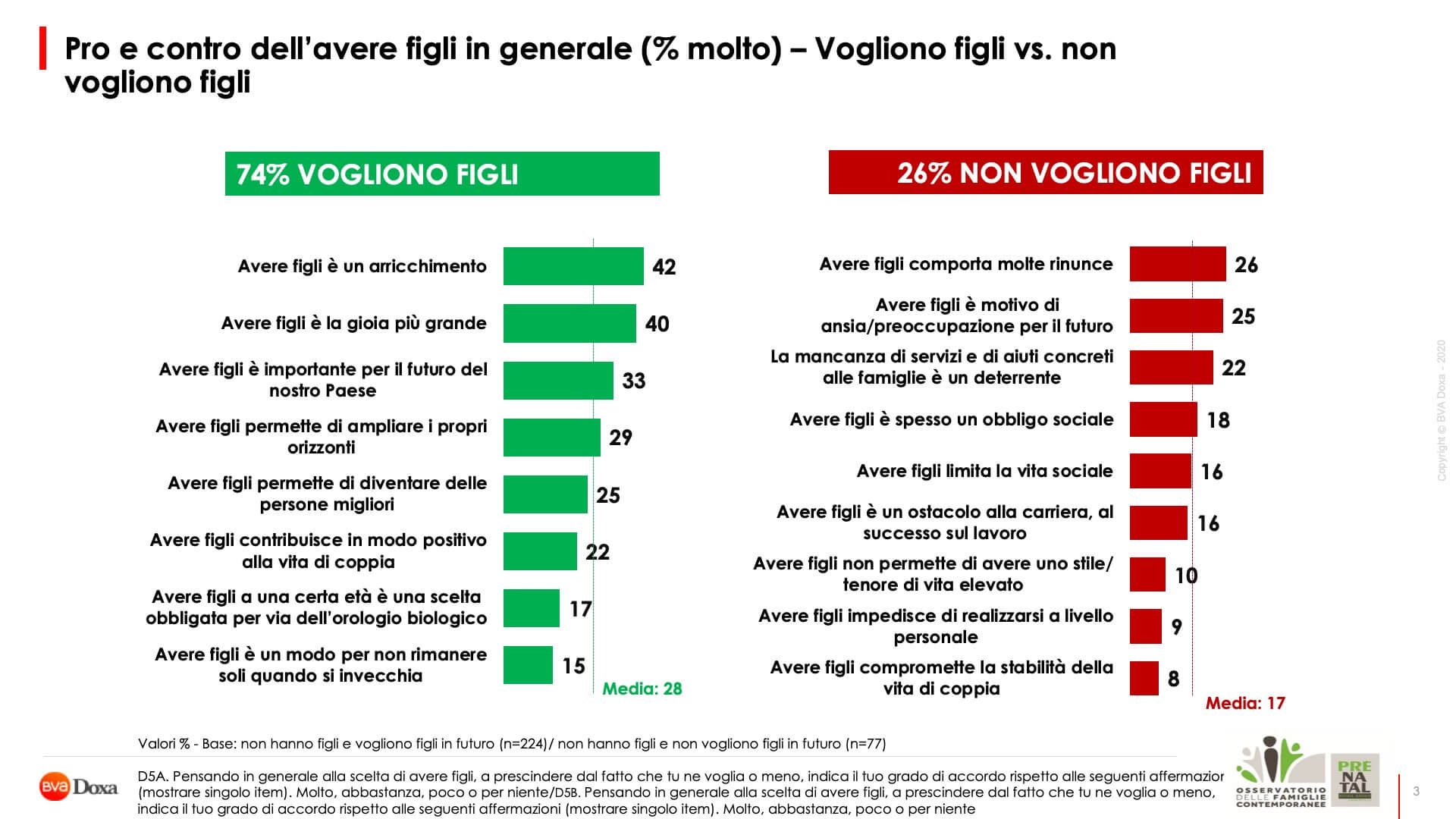 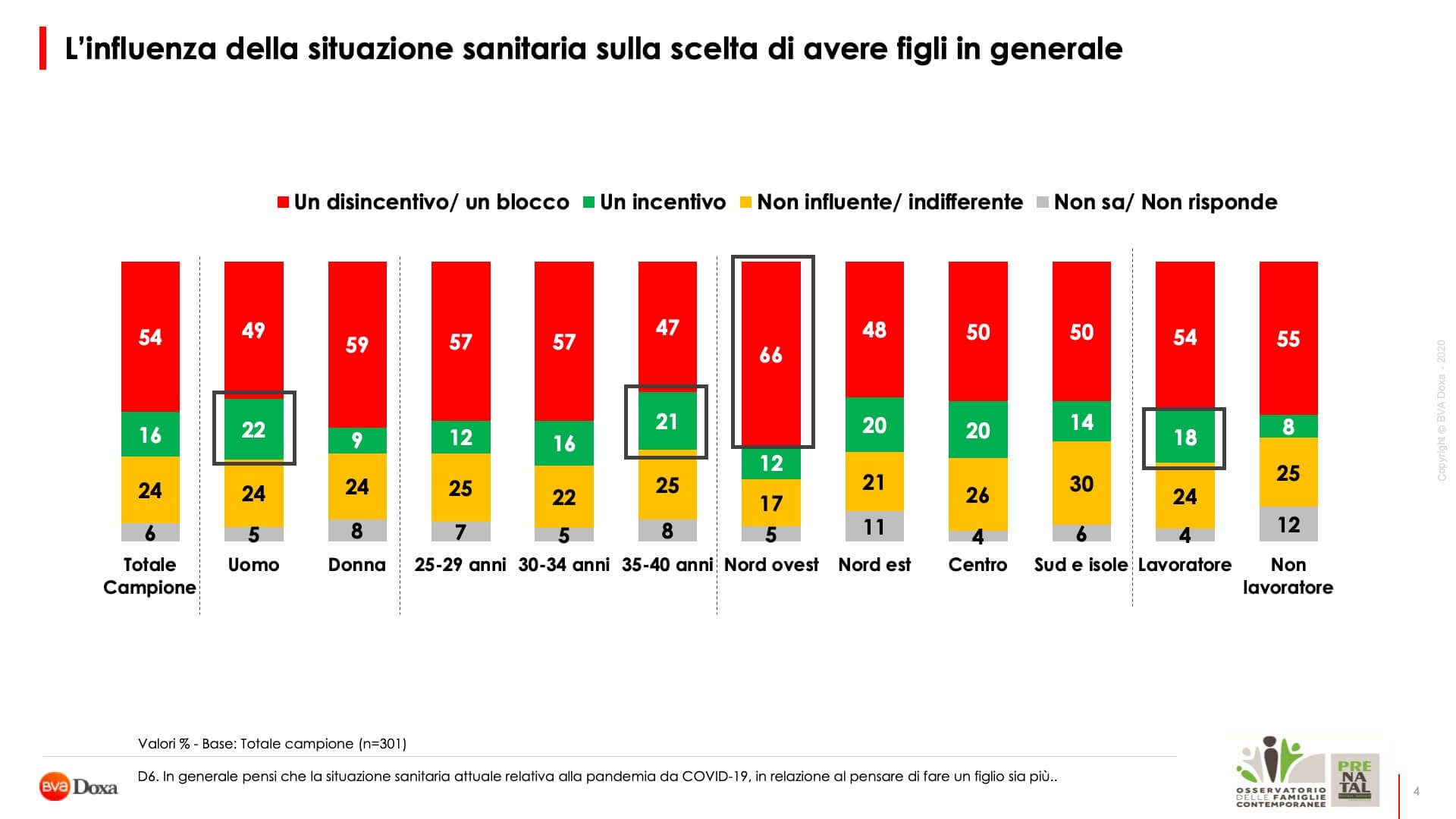 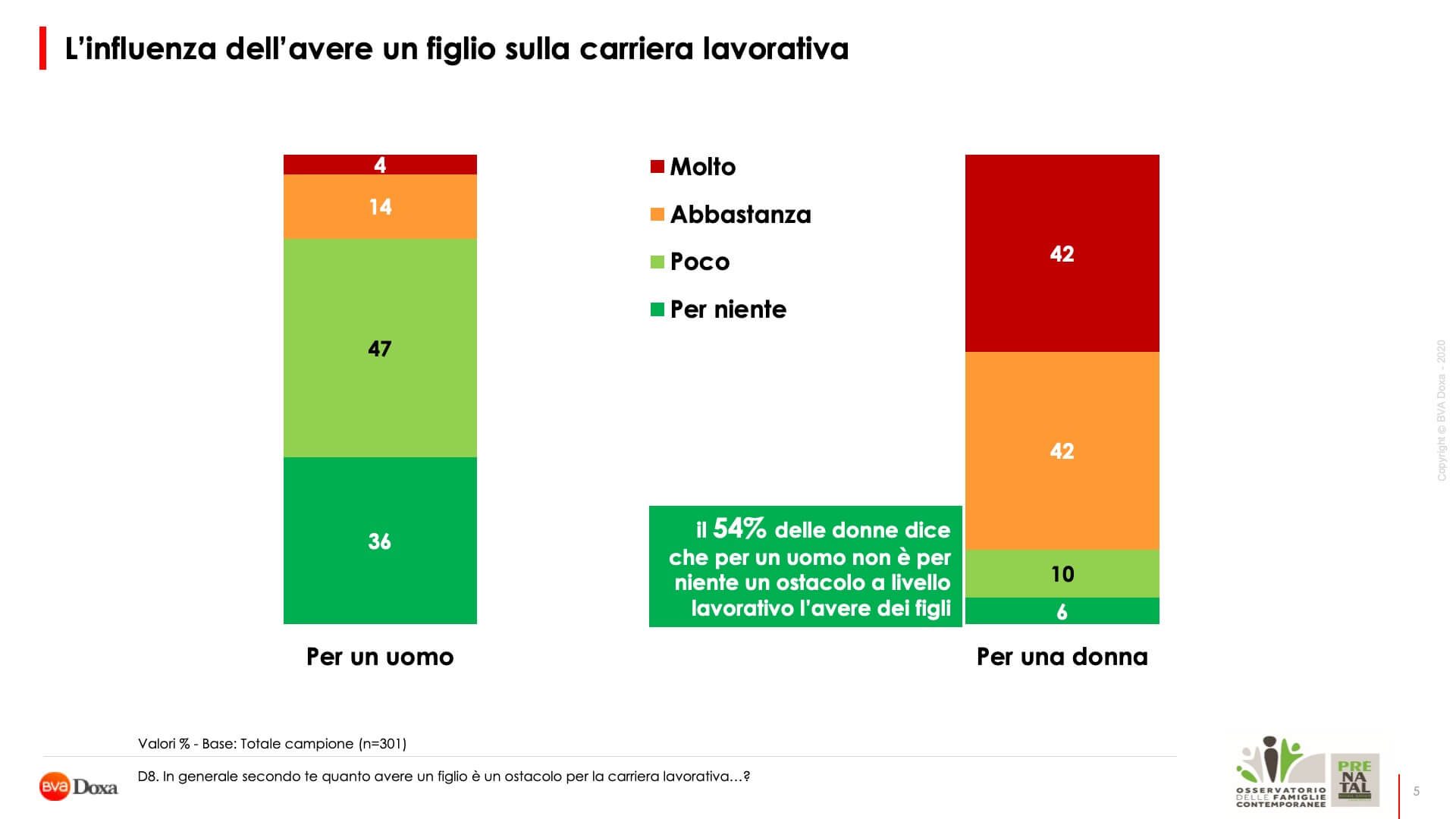 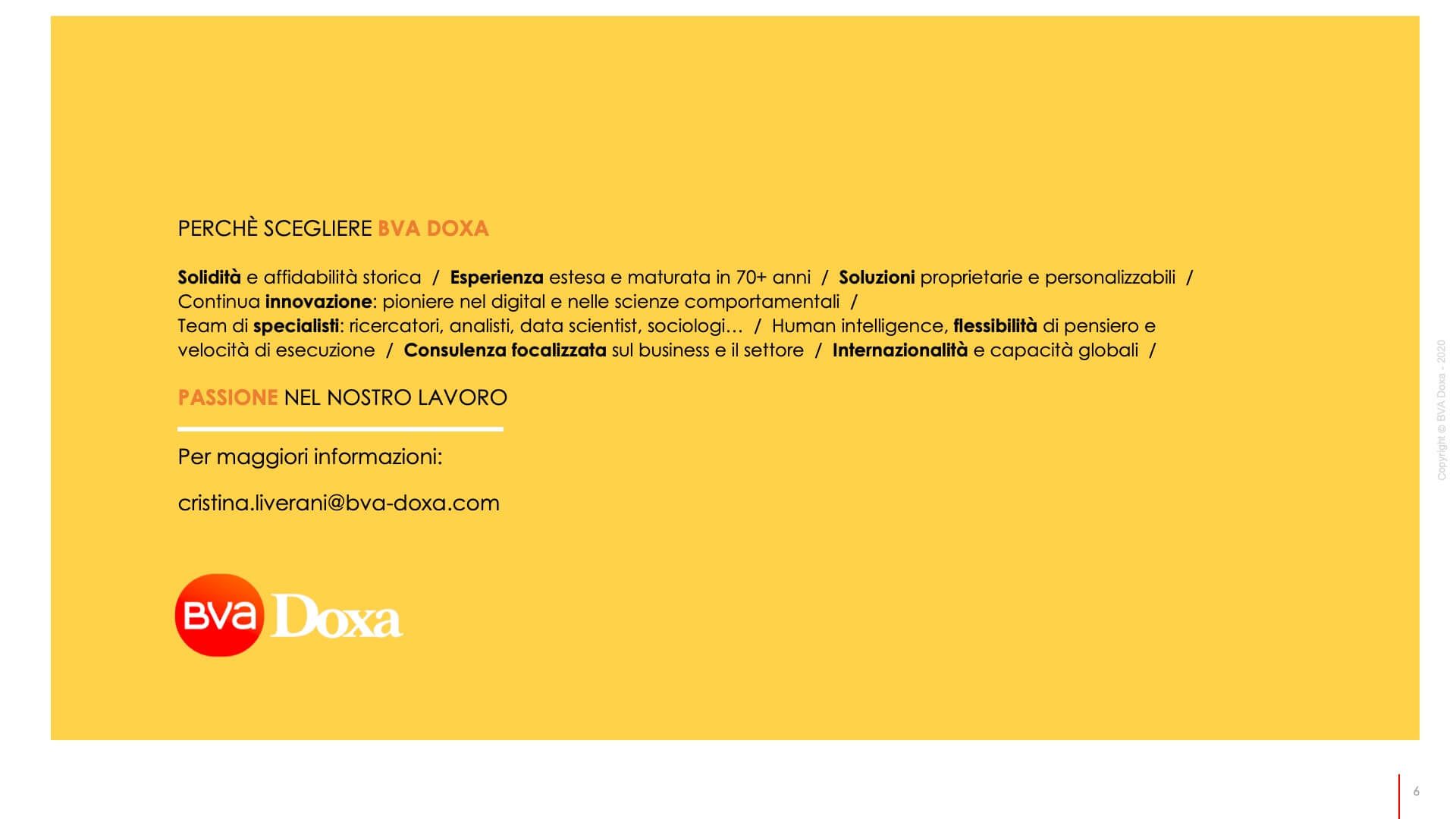