Summer camp in COVID19 times: What Will Italian Parents Consider

This is what stands out from the latest BVA Doxa Kids on the opinions of Italian parents of children and young adults between 0-18 years old, in times of COVID19.

After two months of lockdown, it’s time to evaluate what was going on within Italian families while spending their time at home: parents seem to be way more “tired and stressed” than adults without children (46% vs 41% total sample), but at the same time they believe quarantine was an “occasion to spend more time with my children” (30%). Right now, we are looking at the future and the upcoming weeks: children will face a new beginning and a “new normality”, especially considering the end of schools (up until beginning of June they had video lessons from home). Children and young adults proved to be resilient and to have a good capacity to adapt themselves to a new situation, but what will await them in the upcoming weeks?

The latest BVA Doxa Kids research on opinions of parents in COVID19 times reveals a few predictions on children’s summer. Data were collected via CAWI interviews conducted on Italian parents of children between 0-18 years old, between 8th and 12th of May.

PRIORIETIES FOR THEIR CHILDREN – Thinking about June, parents wish for their children to have more occasions to stay and play outside (70%), something parents of children of different ages and of both genders share in the same way. To start meeting friends and acquaintances again is almost as important (64%), especially for younger kids (3-5 years old), considering for them other ways to talk and meet with friends are more difficult. These priorities are followed by the possibility to start practicing some sport again or some physical exercise (59%), especially for males (64%) compared to females (53%).

SUMMER CAMPS: PARENTS’ REQUIREMENTS – When talking about summer camps or summer entertainment activities organized by local public structures, parents are still careful and hesitant on whether to sign up their children or not: they deeply need some sort of “reassurance” and “rules”. A few elements will help parents make their decision: first of all, the adopted safety measures (44%), particularly important for children younger than 10 years old; then, the credibility of the institution organizing the camp or the activities, and the price (the latter mentioned more by parents with children older than 10 years old). It turns out the traditional elements that parents usually take into consideration, such as whether a “friend of my child is also going” or “my child’s passion” are less important.

All this considered, parents are still hesitant when it comes to summer camps: the highest share still needs to decide whether to send their children to summer camps or not (27% said “maybe yes, or maybe no”), compared to 14% who said “definitely yes” (19% among children 6-10 years old) and 19% who said “probably yes”.

Half of the parents are still doubting because of the “fear of contagion”(up to 62% among children 6-10 years old), while 28% say they don’t completely trust people who would organize the camps and the summer activities (up to 38% among children 6-10 years old); a little less than one in four says they can take care of their children on their own throughout summer. Among the possible institutions and organizations available to organize camps, parents consider parishes the least appropriate choice considering the current context. 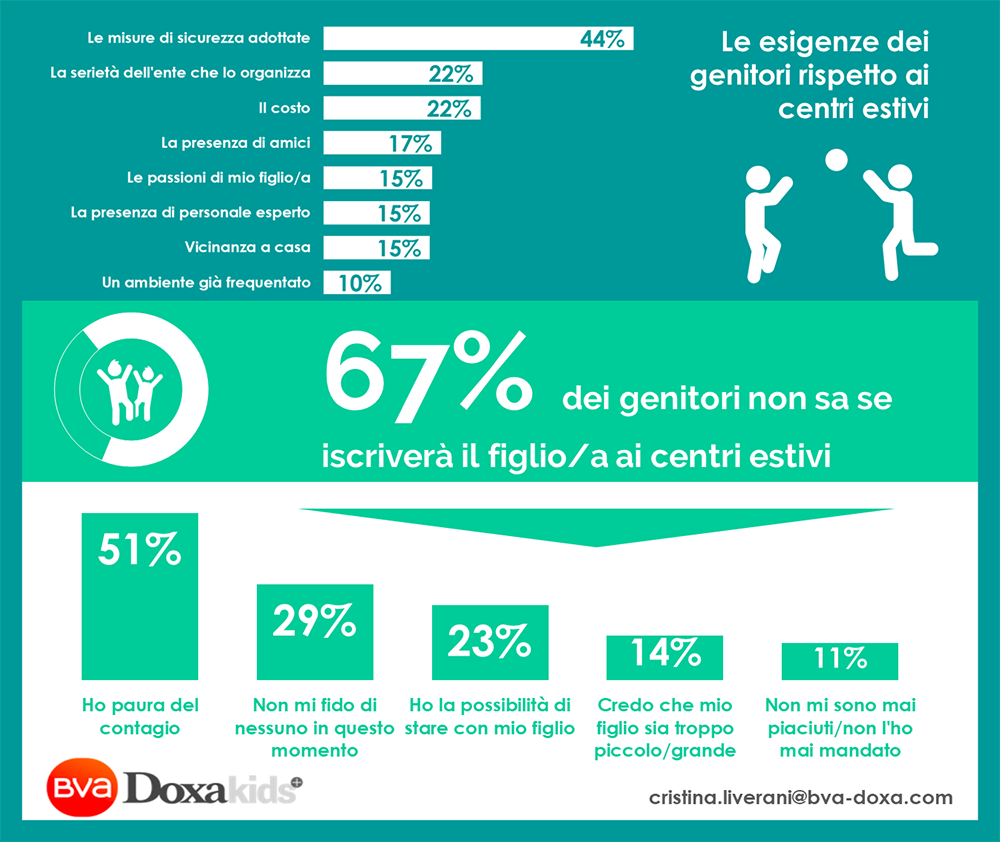