Single Day 2020: A Picture of Italian Singles and their Home

Singles in Italy correspond to 11% of the sample selected by BVA Doxa for the latest edition of the CasaDoxa observatory. Among them, there is a prevalence of men (54%), (women are the remaining 46% of the sample).

Even in the homes of Italian singles there is more and more familiarity with the concepts of “smart home” and environmental sustainability, and life is increasingly devoted to digital.

The vast majority live in apartments and with the health emergency even single people are increasingly pushed to live their own home. In light of this, those who live alone are more likely to identify any possible improvement to their home, especially when it is transformed into a work environment.

This is what emerges from CasaDoxa 2020, the latest edition of the National Observatory on Italians and the home of BVA Doxa, which, on the occasion of the International Singles Day on Wednesday 11 November, offered a picture of Italian singles with an in-depth analysis about their homes and their preferences.

TYPE OF HOME – Most Italian singles live in an apartment (71% vs 29% who live in a single-family house or in a row house), and in 73% of cases the house is owned. On the other hand, the share of those who live in rent is marginal: only 22% of Italian singles, especially young people aged between 18 and 34.

Overall, Italian singles feel half-satisfied with the house they live in. On a scale of 1 to 10, the average grade is 7.56, with 52% of respondents giving a high rating between 8 and 10. For singles, the home is considered satisfactory especially if it has an internal parking space in the building (68%) or in a covered garage (63%), if the house is bright (57%) and if it has adequate spaces to enjoy one’s privacy (56%). Among the characteristics that give less satisfaction, they mention the solidity of the house in which you live (52%), the size of the house (52%) and the characteristics of the neighborhood (52%).

There are a few differences in we consider men and women’s opinions: in women’s ideal home, the presence of a garage is less important (66% vs 60% of men), while other aspects such as the distance from the town center (65% vs 55%), the brightness of the house (65% vs 51%) and spaces to experience one’s privacy (64% vs 48%) stand out more compared to men.

In addition, 47% of singles intend to move in the next 10 years, compared to 15% of those who, on the other hand, claim they do not want to move to another home. However, uncertainty is a relevant figure, because 38% of singles – especially those over 64 – admit they never thought about it. In general, the three most sought-after features in a new home are the brightness of the home (73%), the solidity of the house (71%) and the maintenance status of the property (67%). On the contrary, the size of the house (64%), the ordinary maintenance costs (64%) and the acoustic insulation from external noise (64%) are less relevant. The survey also shows that all the most sought-after features in a new home take on greater relevance for the over 55s, while the younger groups are more lukewarm and tend to be satisfied.

HOME IS THE NEW WORKPLACE: SINGLES LOOK AT IMPROVING THEIR LIVING SPACES – In a time when smart working is central to our daily life, Italian singles are increasingly looking for improvements to make their home a more satisfying and appropriate work environment. On a scale from 1 to 10, in fact, the average given to one’s home is 7.14: 43% rated it from 8 upwards, while 57% of singles are not satisfied and gave scores below 8. Among the Italians who happen to work from home (39% of the sample surveyed by BVA Doxa), singles reach 43%, and, compared to five years ago, those who live alone work more from home in 34% of cases and the same amount of time as before in 55% of the cases.

Smartworking, on the other hand, is a reality for 23% of singles, especially among those living in the North West. With respect to the spaces in their home to dedicate to work, singles are divided: 45% of them say they have a dedicated space or room, while 41% say they do not have a fixed space. With respect to any improvements to be adopted to make one’s home more functional for work, they mostly mention the possibility of having a room to be dedicated exclusively to work (24%), the quality of the Internet connection (15%), the technological equipment provided by the company (15% vs 11% of the total sample, wider gap among all the improvements), insulation from external noise (10%) and heating (10%).

HIGH AWARENESS FOR SMART HOMES, BUT IT’S SOMETHING PERCEIVED FOR YOUNG PEOPLE ONLY – The concept of “smart home” is known by most singles, and among them prevails those who know what these technologies can do, even if they are not up to date with the latest news (39%).

Among singles, 37%, state that they have not yet made a precise idea about it. On the contrary, the “tech enthusiasts”, or those who consider intelligent technologies an important evolution and who already use them at home, are only 11% and, as can be easily understood, are above all young people between 18 and 34 years old. Single people of the next age group (between 35 and 54), on the other hand, are among the 26% who say they are attracted to new technologies for the home and can’t wait to have them in their homes. Finally, those over 55 make up the majority of the 19% who say they are intrigued by the technologies underlying the “smart home”, but which are tools too sophisticated for their age.

SINGLE’S HOMES ARE GREEN – Almost all Italian singles are familiar with the concept of environmental sustainability: 44% – especially the younger ones – admit to knowing it very well, 50% say they have heard of it, but do not have a thorough knowledge of it, while only the 6% have never heard of it. Furthermore, environmental sustainability is unanimously recognized as important even by singles, with 52% admitting that they are more attentive to the various aspects related to this issue compared to three years ago; 45% declare that they have not found changes to their past sensitivity.

Equally important is the attention to the quality of the air you breathe, the quality of the water and the temperature in the house, with 2 out of 5 singles claiming to be more attentive to these aspects than three years ago and more than half (56%) who, on the other hand, are equally attentive.

MEDIA CONSUMPTIONS – Half of Italian singles (-13% compared to the total CasaDoxa sample) have a TV on demand service. The preferred platforms are Prime Video (30%) and Netflix (20%), followed by more niche services such as Infinity (8%), Tim Vision (7%), Now TV (6%) and Dazn (5%, with popularity spikes among men).

Those who have a subscription to Sky (17% of singles), on the other hand, tend to maximize their use: 64% of singles – especially men – admit to watching the channels of the satellite platform more, while 21% – in this case mostly women – watch the digital terrestrial channels more. Finally, the share of those who balance the use of satellite and digital channels stands at 15%.

In terms of the use of traditional media, radio is the medium used most frequently (58%), followed by newspapers (44%, especially by single men). On the contrary, monthly magazines are rarely read by Italian singles (61% say they read them less than one day a week), as well as weeklies (53% say they never or almost never read them).

The use of the Internet is part of the daily life of the vast majority of singles, and 80% of them are also subscribed to some social networking platform: among them, practically everyone has a Facebook profile (91%), but the most popular ones are Instagram (56%), Youtube (49%) and Twitter (30%).

In general, social media are used above all to stay in touch with family and friends (41%), to stay up to date on news and events (35%) and many used them because many friends, relatives and acquaintances are registered (34%). Although it is still one of the least cited reasons for use, singles turn to social media to get in touch with new people more than the total of the CasaDoxa sample (24% versus 21% respectively). As for the most used content, the ranking is led by the trio of news (56%), music (38%) and travel / holidays (37%).

IN-DOOR SPORT – Almost 7 out of 10 singles have practiced sports in the last year, and 51% did so by staying at home, perhaps taking advantage of a dedicated place inside their home (27%). The gyms, on the other hand, are attended at least once a month by 34%. Football is the sport most followed (37%) by Italian singles, while the favorite hobbies are reading (45%, with greater popularity among women and the over 55), travel (37%), do-it-yourself (22%) and gardening (22%). 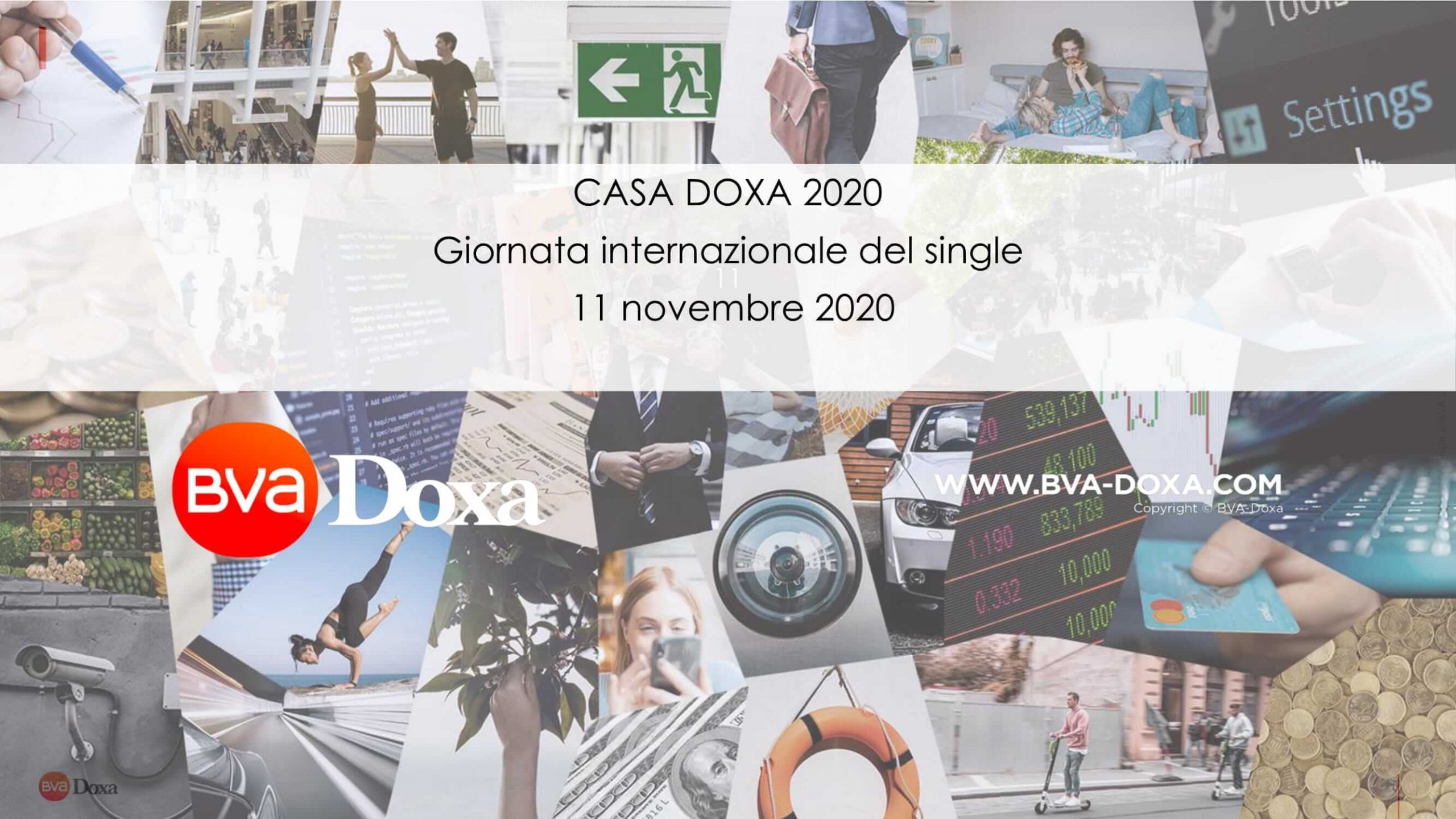 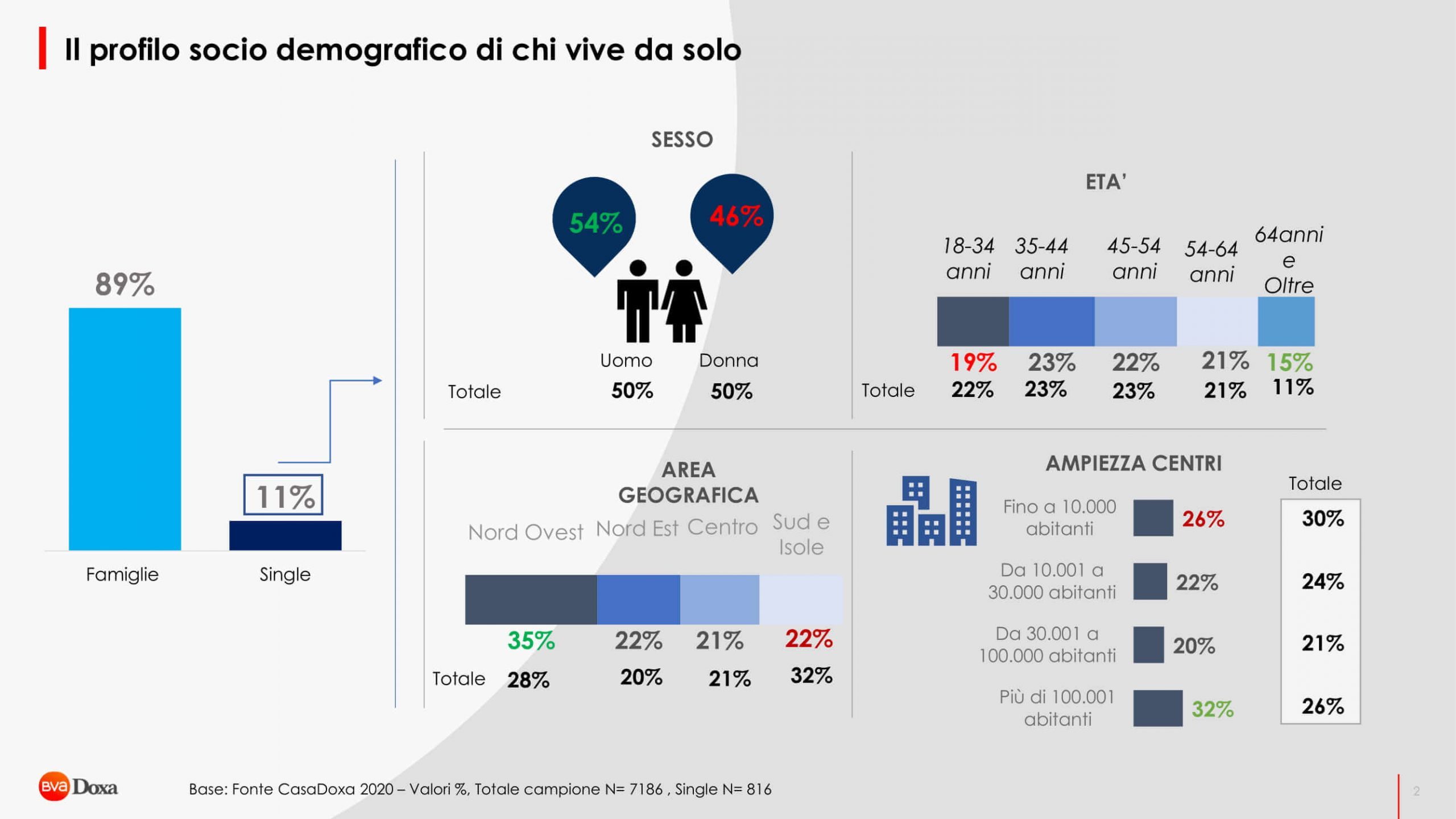 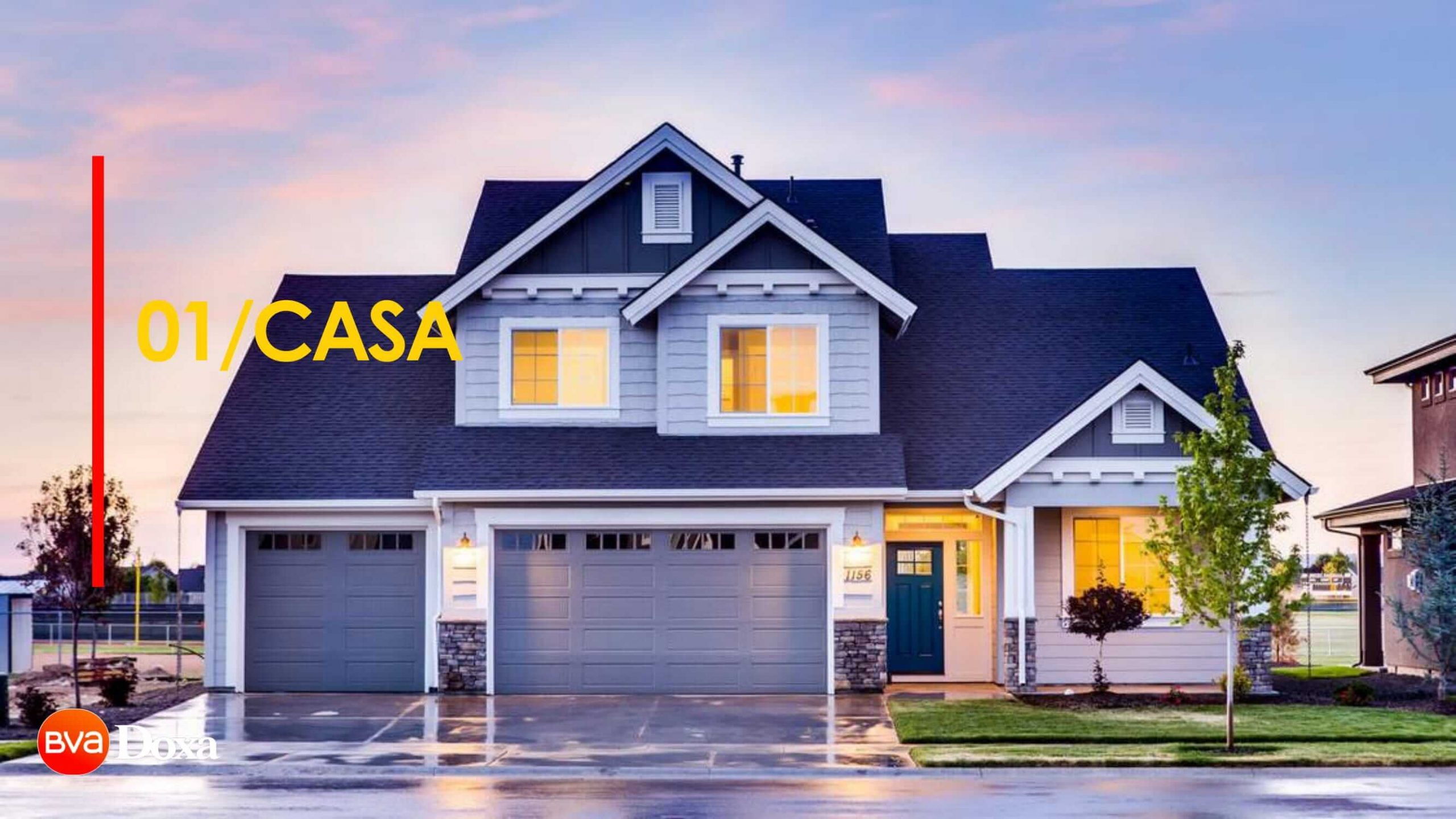 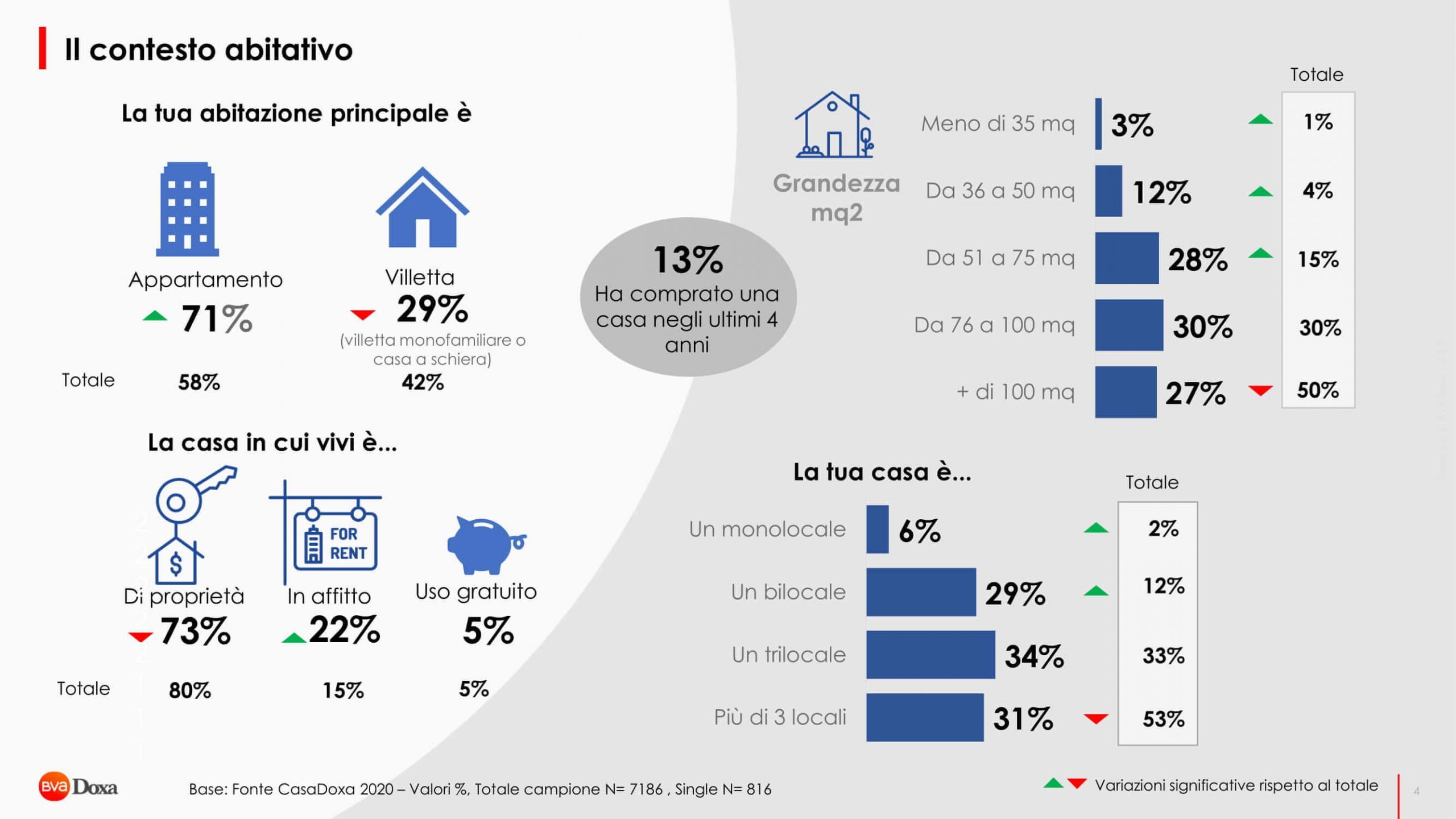 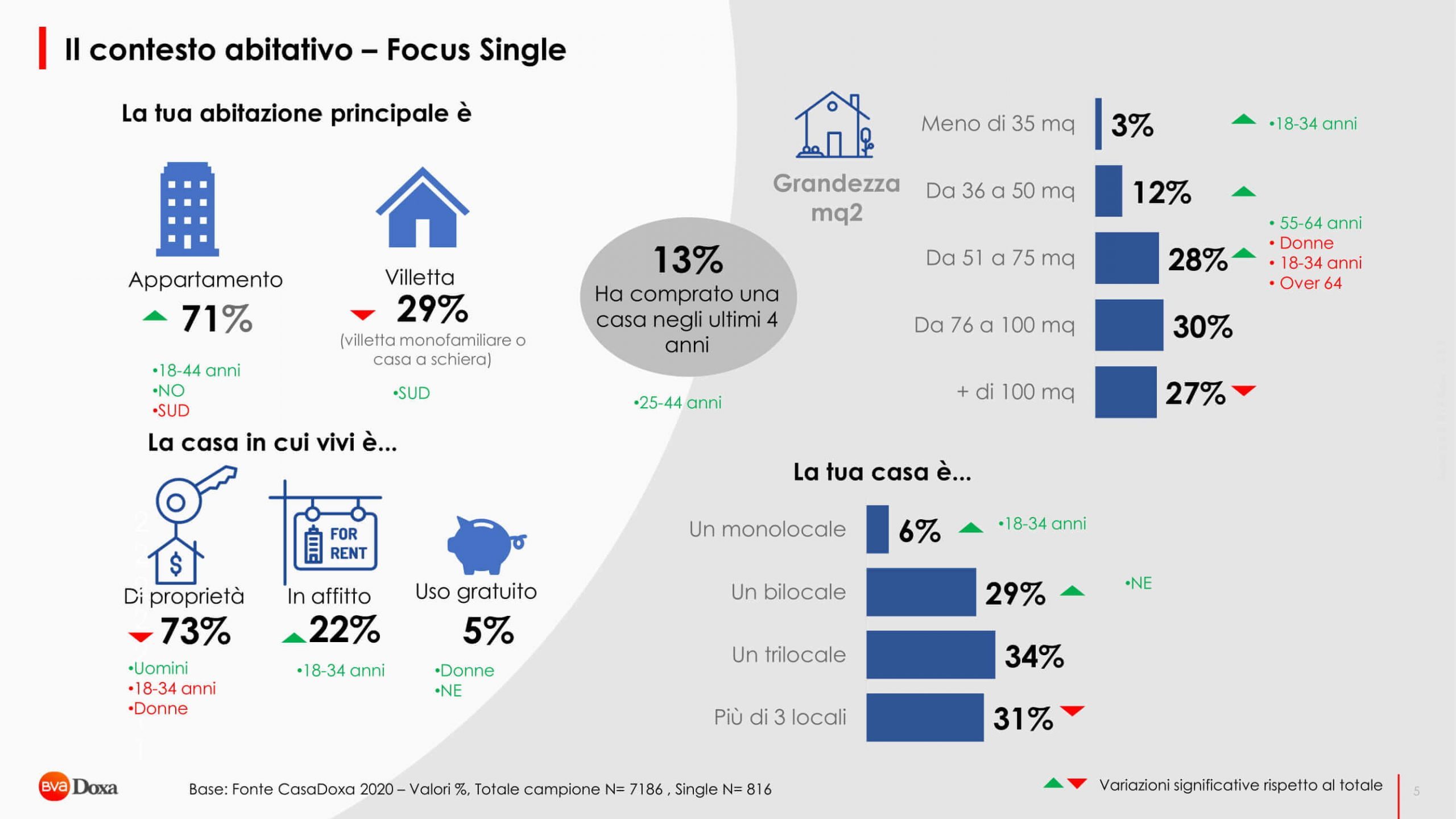 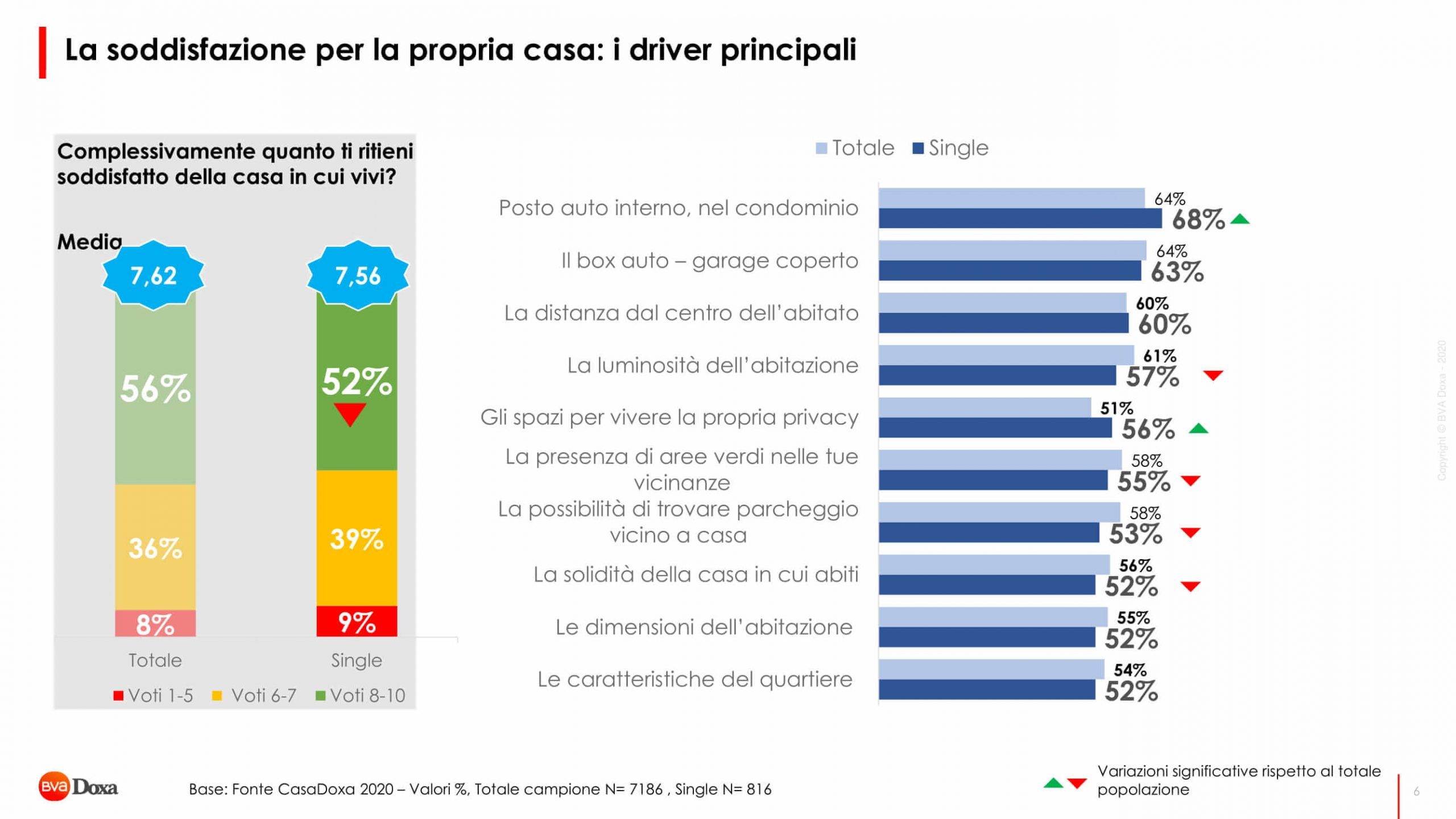 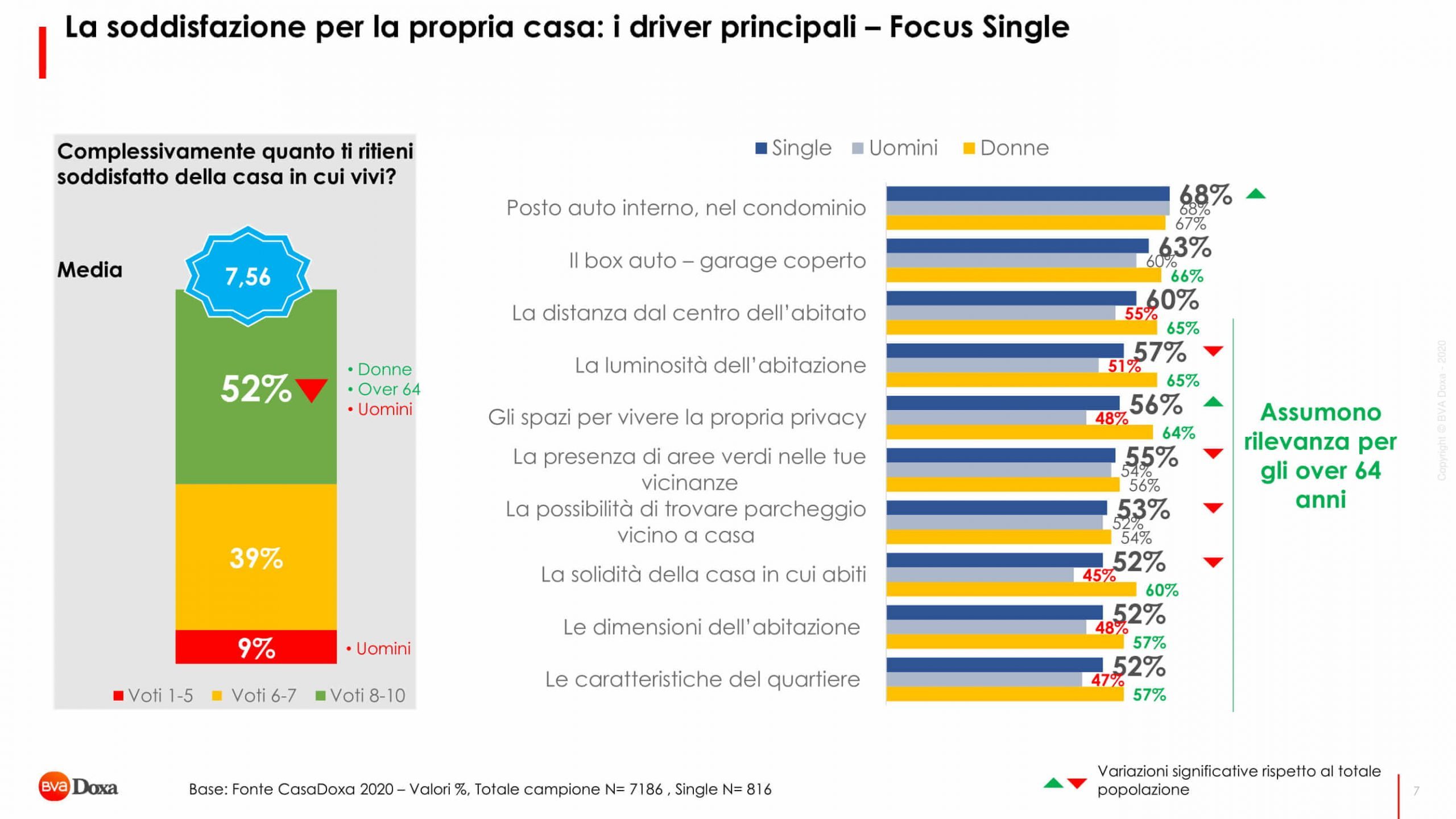 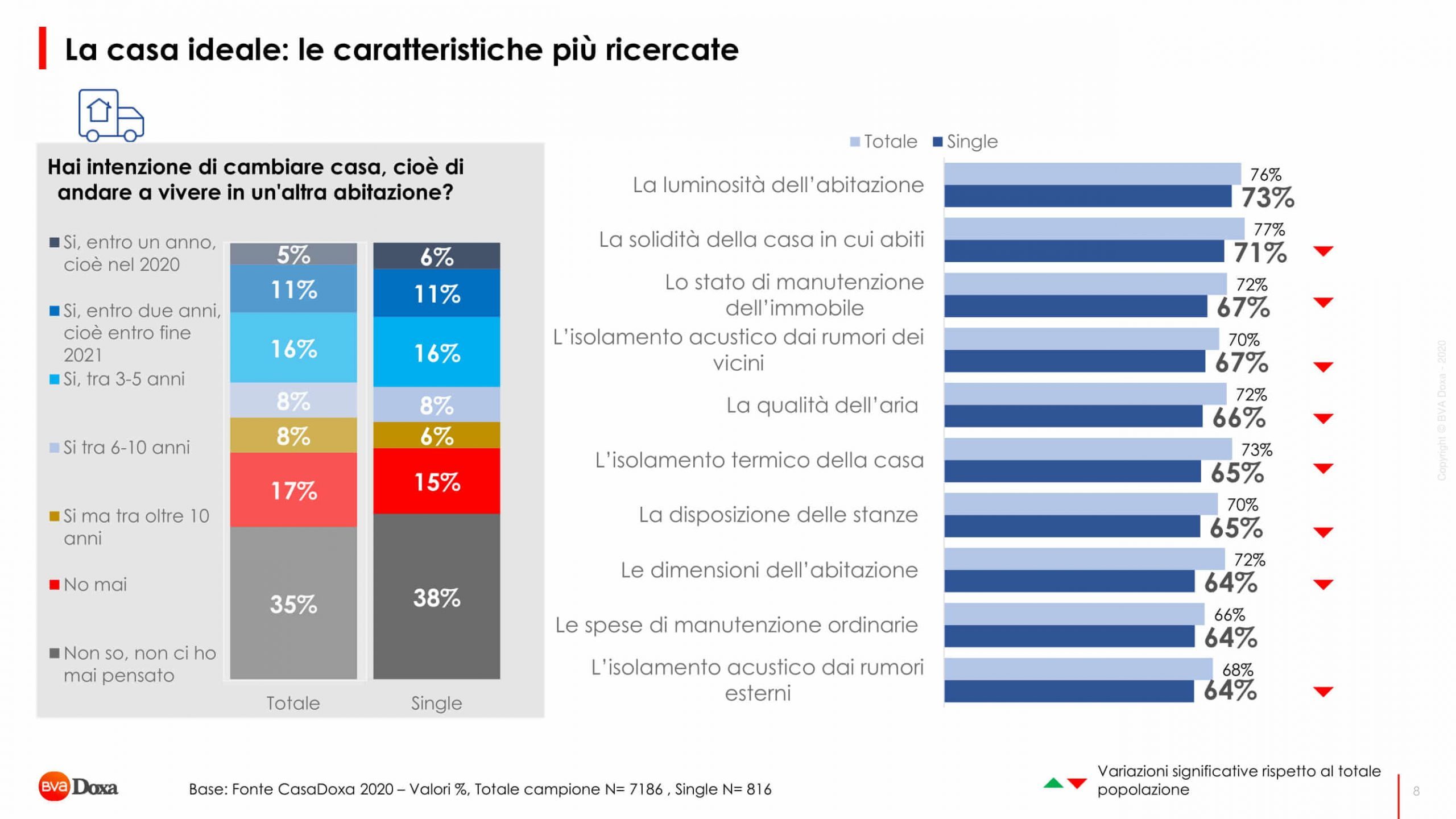 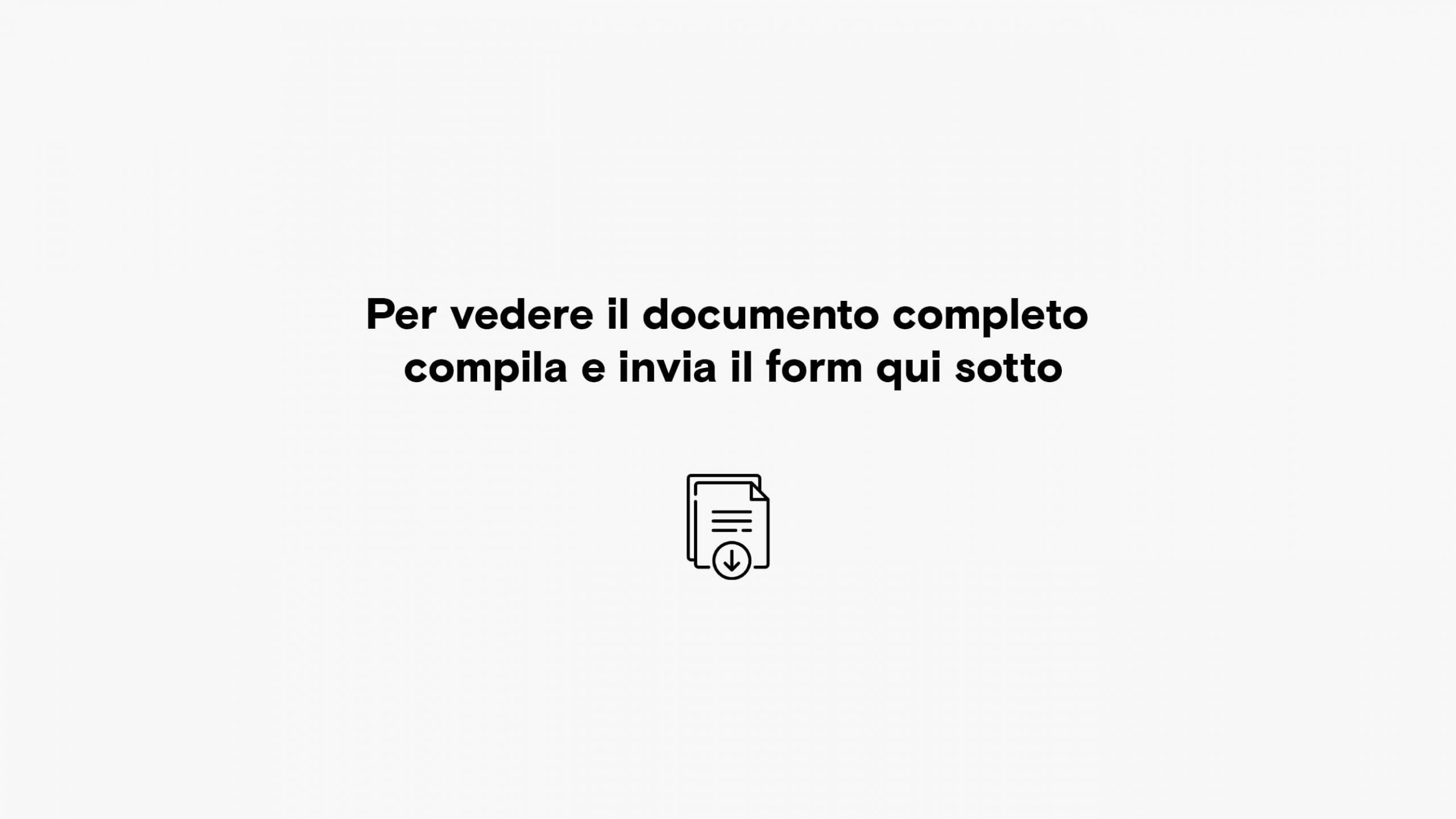 Fill out the form to download the research in pdf

All fields with * are mandatory.

For requests of a commercial nature and for a quote, access the form

Free and fair elections and governance by the will of people are preconditions of a strong democracy, but only 37% of citizens living in the ...

During the latest wave of the European Opinion Tracker, the study conducted by BVA Doxa with the contribution of the international experts of the BVA ...

According to the latest results of the End of Year Survey conducted since 1979 by research institutes belonging to the Gallup International network, 43% of ...

Brand reputation and consumer initiatives are increasingly more decisive factors in choosing a brand. The relationship with consumers is fundamental: 83% of Italians, in fact, ...

Internships are considered a useful tool for training and entering the job environment, as well as particularly effective for receiving a job offer. This is ...

11/11/2020 Lifestyle
Prev
Next
Please note that this website uses cookies to deliver our services to you, improve your experience and measure the usability of the site. By using this website you consent to their use. For more details, please read our Privacy Policy.