The Second-Hand Economy in 2020 is worth € 23 billion, equal to 1.4% of Italian GDP and online, which continues to grow, accounts for 46%, or € 10.8 billion. 54% of Italians bought and / or sold used items, 23 million in 2020 alone, of which 14% for the first-time last year. These are some of the evidences that emerged from the Second-Hand Economy 2020 Observatory conducted by BVA Doxa for Subito in March 2021 on a representative sample of the Italian population through 1,001 telephone interviews and 1,002 online interviews. The second hand is today a form of circular economy that is not only a way to give value to things, but also enters for the first time fully on the podium of the most widespread sustainable behaviors and which brings value to the country, to people and to the Planet.

Second Hand Economy continues to represent a strategic lever to positively affect the present and future of people, society and the Planet, so much so that in 2020 it generated a value of 23 billion euros, equal to 1.4% of Italian GDP, driven mainly from online, which weighs 10.8 billion euros, or 46% of the total and constantly increasing. The confirmation comes from the seventh edition of the Second Hand Economy Observatory conducted by BVA Doxa for Subito – the n.1 platform in Italy to sell and buy in a sustainable way, with over 13 million unique monthly users ** – which analyzed behaviors and motivations of Italians with respect to the sale of second-hand vehicles.

This form of circular economy is taking on an increasingly important role in our market, also as a result of the Covid-19 emergency and the new normality it has created. In fact, in 2020 alone, 23 million Italians relied on second hand, 14% for the first time, and who led the sale of used cars to rise to third place among the most widespread and practiced sustainable behaviors. If we look at the rate of adoption of the behavior, the spread of the second hand rises for some specific categories, such as graduates (66%), GenZ (65%) and families with small children (63%).

SECOND-HAND IS MOSTLY ONLINE – 2020 was a year in which Italians had to rethink their lives on a more virtual level, a need that also had consequences on the sale of used items. On the one hand, there has been a greater use of second hand, with over 3 million Italians approaching this form of circular economy for the first time, on the other hand the value generated by online continues to grow, equal to € 10.8 billion, or 46% of the total. Among those who bought or sold used items in 2020, 63% chose to do so online, a privileged channel above all for its speed (47%), but also for the possibility of buying or selling from the comfort of home (44%)

AMONG OTHER REASONS, SUSTAINABILITY – Buying or selling used products is confirmed as one of the most widespread sustainable behaviors of Italians (54%), winning the third place which until last year was occupied by the purchase of products at km 0 (50%). On the other hand, separate waste collection (91%) and the purchase of LED bulbs (62%) remain stable in the first two positions.

The frequency is growing, with 70% of Italians buying or selling more than 2 times a year, and the number of items traded is also growing: for 33% of those who buy, mainly to save in a moment of uncertainty or because they have had more time available, and for 36% of those who sell, because they had more time, to earn something in a moment of uncertainty but also because they changed their habits due to the pandemic. Finally, the average life of the objects is growing: 62% of the purchased good will be collected, or once its use has ceased, it will be donated or resold, thus removing its disposal in landfills and the consequent environmental costs of disposal.

A WAY TO GIVE VALUE TO DIFFERENT ITEMS – The second-hand economy is therefore increasingly a way to give value to things (50%), by virtue of a review of one’s priorities and choices, especially for the younger sections of the population (Millennials 59%). It is also a sustainable choice (48%), a vision shared above all by Generation Z children (59%), but also perceived as intelligent and current (42%), even more so for Generation Z (55%) and for Millennials. (52%).

NEW DRIVERS – The percentage of those who buy second hand to save money falls (50% vs 59% in 2019), surprisingly if we consider the year characterized by a difficult economic context, but which nevertheless remains relevant, confirming the possibility of making a good business as an essential condition in the purchase and sale of second-hand. The desire to contribute to the reduction of waste and environmental well-being through reuse (47%) and those who consider it an intelligent way of economizing (44%) follow shortly after but growing compared to the previous year. A new motivation also comes into play, linked to the changed needs that have arisen following the emergency from Covid-19, such as the discovery of what can be used or what can be done without, having lived more of the living space (13%).

Among the reasons that push the sale instead, the first driver always remains the desire to declutter and the need to get rid of the superfluous (73%), 39% sell because they believe in reuse and are against waste and 34% to make money. Then new motivations emerge linked to specific needs born in 2020, such as the adaptation of home spaces to DAD and / or smart working (13%), to satisfy newly born needs and passions (12%), but also for a worsening of the family’s economic situation (11%).

THE FUTURE OF SECOND-HAND – The used economy has experienced a real continuous evolution, with an acceleration during 2020 which has seen it grow and become more and more relevant. For 82% of respondents (+ 11% 2019) the second hand economy is destined to grow again in the next five years, due to the crisis in the current economic context (66%), but also because it will increasingly become a conscious and green (49%), an excellent tool to save (44%) and to make consumption accessible to more people (28%). 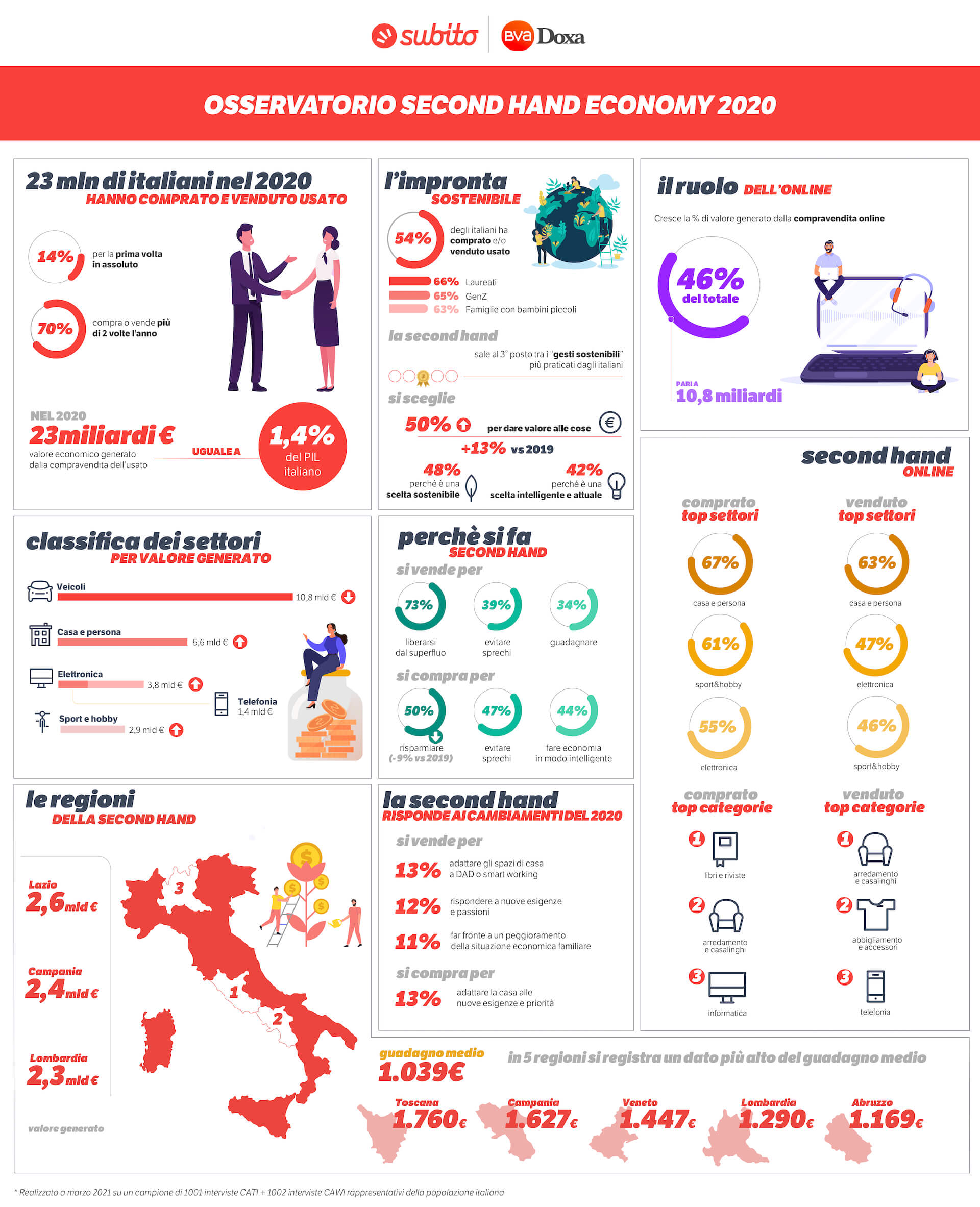