Opinions and Predictions on the Covid-19 Emergency in Italy, UK and Germany

Among European countries, Italy is the one where the fear of contracting Covid-19 is the highest: 90% of Italian citizens express fear of being infected by the current pandemic.

The level of fear is particularly high, but so is the level of trust in the government on how it is dealing with the emergency: 72% of Italians positively evaluate governmental actions, a record result in Europe. In addition, Italians comply to the precautionary measures the most among the surveyed European countries: indeed, 93% of citizens is staying at home.

In order to contain the spread of the virus, 93% of Italians are willing to give up some of their fundamental rights, an extremely significant result and the highest in Europe.

The health emergency hit Italy particularly hard, but Italians remain optimistic for the future: 45% believe that the situation can be resolved in a short time, unlike other European countries where it seems that citizens are preparing for the worst and feel pessimistic.

Many still consider conspiracy theories: for one Italian out of four the virus is the result of an external force, an idea equally shared by French citizens.

This is the picture coming from the research carried out by BVA Doxa on the perceptions, concerns, opinions and predictions of Italian and other European citizens (France, UK, Germany) on the health emergency deriving from the spread of Covid-19. The research is part of a larger study conducted in 26 countries around the world together with Gallup International, the network of which BVA Doxa is a founding partner.

Since the WHO declared the health emergency of Covid-19 a “pandemic”, citizens in Europe and in the rest of the world express various concerns, opinions and predictions about the current situation, while considering the actions taken by their respective governments as well.

FEAR OF INFECTION IN ITALY – The overwhelming majority of Italians express concerns: 90% fear to be infected by the virus, a result which is even higher in South Italy and in the Isles were the fear increases up to 94%. Despite lower than in Italy, levels of concerns of being infected are significant in France and UK as well (UK 78% and France 76%). Germans, on the other hand, seem to be the least concerned about the situation: less than half of the population (46%) express feelings of concern. On a global level, levels of concern are lower than Europeans’ and reach 62%.

HIGHEST LEVEL OF TRUST IN ITALY – In Italy, where the situation is particularly difficult and uncertain compared to the rest of Europe, high levels of trust in the government’s ability to manage the health crisis were found: 72% of Italians positively evaluate the actions taken by the government and Prime Minister Conte. The same cannot be said about other European governments, which do not register equally important levels of trust: slightly more than half of the population trusts the government in the United Kingdom and France (respectively 59% and 52%) and even lower is the trust given to Angela Merkel in Germany (47%).

JUST A FLU? – Some consider media’s reaction to the health emergency exaggerated: in Italy, 29% of the population believes media overstated the news while, on the other hand, 67% believe that the media are reporting the emergency correctly. However, Germany is the most skeptical: three out of five Germans believe that the situation is depicted more seriously than how it really is: percentages of citizens who believe the media are overstating the news are lower in the United Kingdom (26%) and France (17%).

TO REDUCE THE INFECTION WE DO “WHATEVER IT TAKES” –  In order to contain the pandemic and observe a clear inversion of the trend of infections, almost all Italians (93%) are in favor of renouncing to some fundamental rights as, for example, privacy. The result is extremely significant, the highest in Europe and consistent in all age groups and geographic areas considered. Although with lower percentages, citizens in other European countries are also willing to limit their fundamental rights to stop the spread of coronavirus: 84% in France, 72% in the United Kingdom and 71% in Germany. Results are in line with the rest of the world: 76% of respondents worldwide would sacrifice part of their fundamental rights if this would help containing the infection.

ITALIANS ARE OPTIMISTIC, EUROPE IS PREPARING FOR THE WORST – Italians’ opinions on the upcoming months are divided: 43% believe the worst is yet to come, while 45% are more optimistic and believe the situation will improve in a short time; the remaining 12% believe the situation won’t change significantly in the upcoming months. After an initial phase where UK underestimated the problem, the country is now preparing for the worst: 82% of the British expect to face negative situations in the upcoming months. Despite the level remains high, the percentage of people expecting the worst drops in France (70%) and Germany (54%). It becomes even more interesting to underline the percentage of optimists in different European countries: in Italy, 45% believe we already faced the worst, in Germany only 9% think the same, in France 5% and in the UK only 3%.

ITALIANS STAY AT HOME – According to the results, everyone in Italy took at least one precautionary measure. Staying at home is the main measure adopted: 93% of the citizens are strictly respecting this provision to reduce the trend of infections; 87% indicate that they wash their hands frequently and 63% use hand sanitizers. Masks and gloves are very popular but less used by citizens (44% and 40% respectively), especially because of the shortage of these products. Italians comply with the strict recommendation to stay at home, but in other countries the situation is different: in France 85% of the interviewees remain at home and in the United Kingdom 71%. Germany ranks last, with a percentage of just 43% of citizens complying with the rules.

The only widespread behavior adopted everywhere is frequent hand washing, with values ​​between 80% and 90% in all other European countries. However, despite washing hands frequently is the most adopted measure worldwide (75%), only 45% have limited social contacts and 14% have not taken any measures or changed any behavior yet. The recommendation to stay at home in some countries has been practically ignored, thanks to a lack of communication from the Government: only 11% in Turkey, 20% in Pakistan and 34% in Afghanistan.

WHAT’S BEHIND THE CORONAVIRUS INFECTION – In some countries, alternative theories on the origin of Covid-19 are been discussed: theories range from blaming China or the USA, a laboratory, or a political/economic or pharmaceutical industry plan. In Italy, almost half of the respondents (47%) believe Covid-19 originated from natural causes, while almost a quarter (23%) believe it is the result of external force. Citizens in France have even stronger beliefs in this regard: 29% are convinced of the existence of external forces. The same concern is found  in other European countries as well, but to a lesser extent: 18% both in Germany and in UK. Worldwide, slightly less than half of the population (46%) believe that the virus originated and spread naturally, while a third (36%) believe it is the result of external forces. 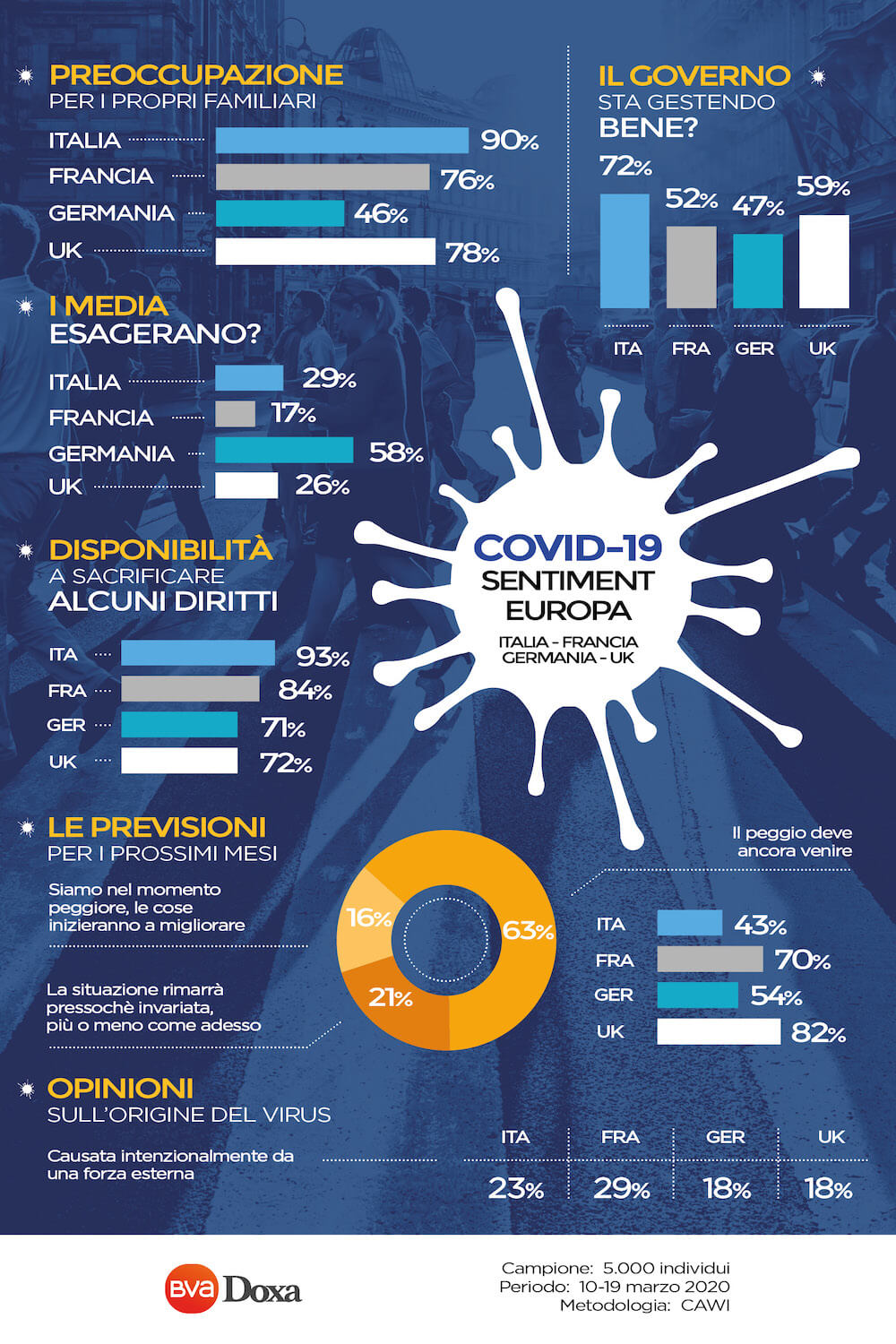 26/03/2020 News, Public Opinion
Prev
Next
Please note that this website uses cookies to deliver our services to you, improve your experience and measure the usability of the site. By using this website you consent to their use. For more details, please read our Privacy Policy.