According to a recent survey conducted by BVA Doxa, 50% of people in Italy own a pet and, of these, 11% have adopted it in the last year. Whether the reason is the desire for company and affection, particularly felt during the pandemic, or to satisfy a request from children, many animals have found a home. The pandemic and lockdown may also have played an important role in the choice of adopting an animal, especially since smartworking gives the possibility of having more time to take care for it. But who are the people who have adopted one in the last year? The research, conducted online on a sample of 1,000 cases, also outlines the identikit of these “new pet lovers”.

A GROWING TREND – “The recent pandemic “,” The fear of isolation “,” The desire for affection“,”A company for my children“: these are the main reasons mentioned by people who were asked to motivate the choice to adopt a pet in the last year. Among the rapidly growing trends in the last period, there is in fact a particular focus on everything concerning the adoption of pets, both for a purely sociological interest of welfare, and for what concerns the business and the product categories that revolve around our animal friends.

ADOPTIONS IN THE LAST YEAR – From a recent BVA Doxa survey conducted on a sample of 1,000 cases, it emerged that 50% of Italian families own a pet and, of these, 11% have adopted it in the last year. The preferences are mainly oriented towards the cat and the dog chosen respectively in 50% and 46% of cases (reversing the trend compared to past years where the dog was in the first place) followed, at a great distance, by the category of birds, in particular goldfinches, canaries, parrots, and turtles, which are equal to 7%; hamsters and rabbits amounted to 5% while ‘the timeless’ goldfish is welcomed in the aquariums of 4% of families.

REASONS TO ADOPT A PET – Among the main reasons behind the adoptions, the joy (36%) of their presence prevails, followed by the company that is considered a real emotional comfort (33%) and the unconditional affection that they manage to transmit (29%). Another important driver is represented by the request of children who, thanks to pets, are able to develop a sense of responsibility (7%) but also to fill moments of emptiness (21%) especially in light of the particular context in which we are living: indeed, some respondents said: “I gave it to my children / my partner because it was a difficult year”.

THE PANDEMIC AND THE CONTEXT INFLUENCED THE CHOICE – Smart working was also an important factor in choosing to adopt a pet, directing the ‘undecided’ towards adopting and making them believe it was the ‘right time’ (14%) thanks to greater availability of time, both current and prospective, to devote to their pets’ education and management.

The presence of a pet with whom to share several hours of the day also entails a change of habits and involves greater attention both in terms of cleaning and hygiene of the house, and towards the animal itself: 28% it declares, in fact, to have diversified and increased the use of products to keep the spaces sanitized and to keep the animals clean to guarantee mutual protection.

IDENTIKIT OF “NEW PET LOVERS” – The research shows a group with a majority of women, especially in the middle-young age group, with 40% between 25 and 44 years.

The level of education is medium with 60% of high school graduates. Among the professions, there is a strong presence of office workers, but also of teachers, entrepreneurs or traders, almost no one who already retired: the possibility of spending more time at home, for those who usually find themselves out for most of the day, has helped the much-postponed choice. The “new pet lovers” are found mainly in Central Italy, with a greater concentration in Lazio, Tuscany, and Sardinia, and usually live in families made up of four members.

In conclusion, the current historical period seems to have made Italians rediscover the importance of the presence of a pet; hopefully, once the so-called and highly desired normality will come back, these “new pet lovers” will continue to give importance to the presence of animals that found a home in the last year. 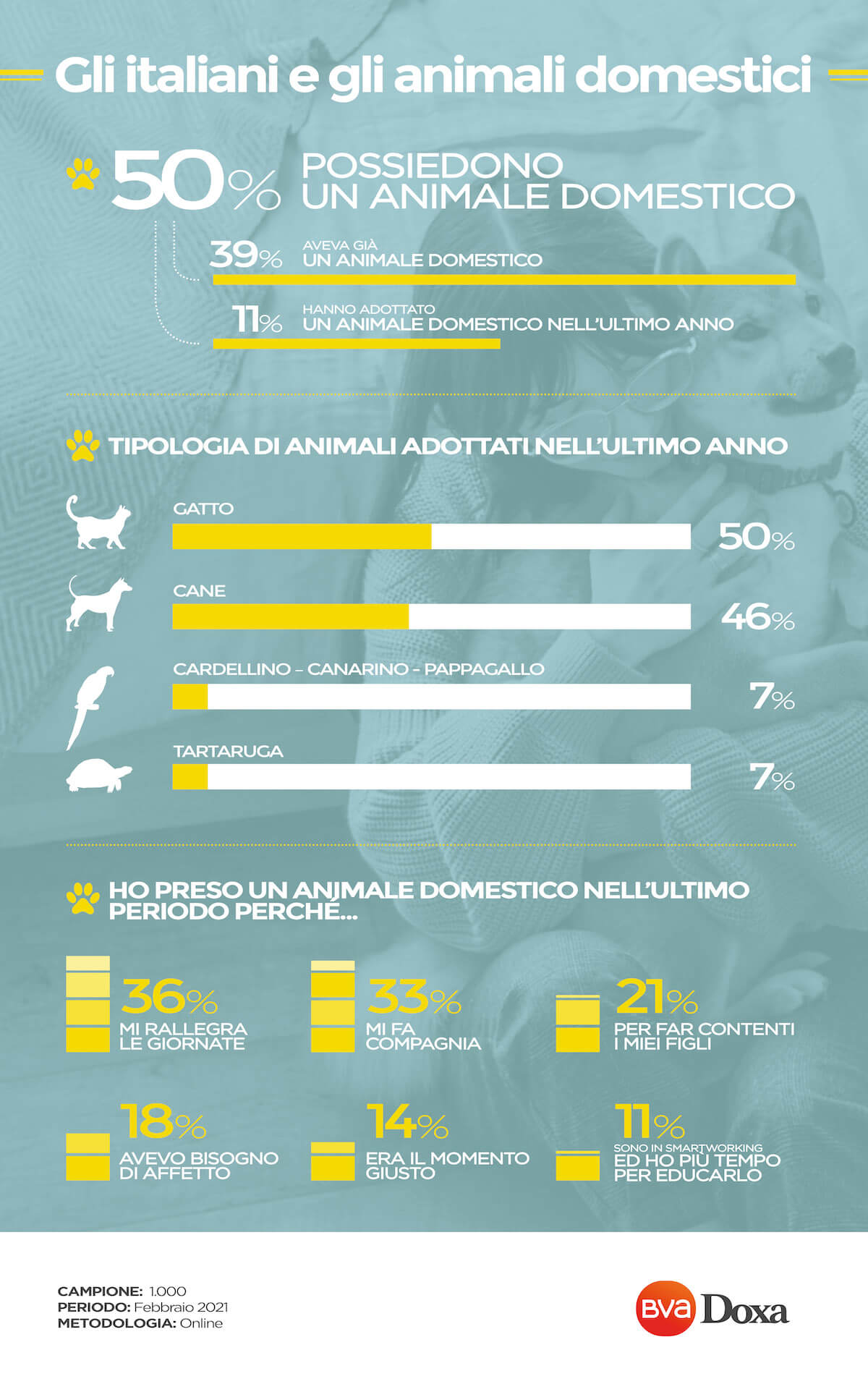 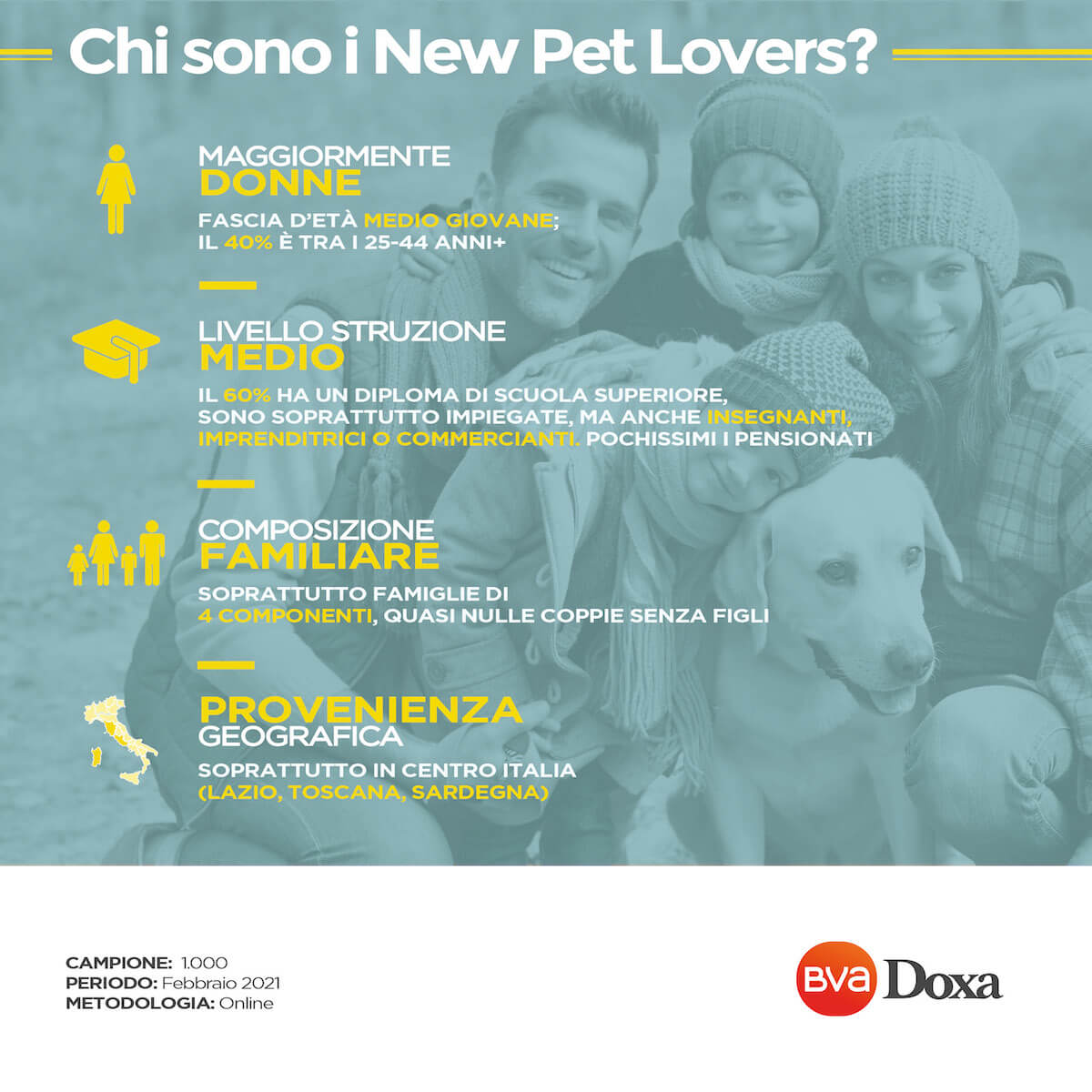