During the lockdown measures adopted due to the coronavirus emergency, Italians were forced to stay home as much as possible: the overwhelming majority kept going outside only once a week and, in particular, to buy primary essential goods. However, with the start of the so-called “Phase 2”, people started doing many activities again, such as walking and practicing some sport.

In this context, the preferred vehicle for most Italians remains the car, which is perceived as way safer than other means of transports; public transport is still considered too risky, because it is seen as a place where the infection can easily spread. However, since the easing of restrictive measures, there is an improvement in the perception of risk on all means of transport. The same goes for other places as well: “Phase 2” makes people feel safer in places such as bars or restaurants, cinemas, theaters and shopping centers (as soon as they will reopen) and even hospitals. But this new phase also made the debate on whether to re-open some activities more intense than ever: for a large share of Italians (63%) collective health remains the priority, but an increasingly important share (37%) is pushing to re-open the activities to restart the economy.

This is what emerges from the latest BVA Doxa research on the opinions and predictions of Italians in times of Coronavirus, which in its sixth and seventh waves dedicated a focus to the activities and fears of Italians, before the start of “Phase 2” and immediately after.

In the latest survey conducted in Italy by BVA Doxa on the impacts of the Covid-19 virus on Italians, a clear picture of the population stands out: people were respected the quarantine rules and turned out to be careful about not leaving the house too many times; Italians were concerned about public transports and hesitant about the reopening of certain places. Now that Italy entered “Phase 2”, Italians seems more reassured because of the general improvement of the situation regarding the spread of the infection. The research – conducted on a representative sample of more than 1000 Italians – focused, among other themes, on the activities and fears of the Italians a few days before the start of “Phase 2” (period prior to May 4, 2020 ) and during the following period (between 4 and 10 May). The survey is part of a weekly observatory that started on 20 March which is continuously analyzing some issues and will integrate others ad hoc over the weeks.

PHASE 2: STILL AT HOME, BUT SOME ACTIVITIES RE-START – Despite the restrictive measures introduced during Phase 1 of the lockdown are now being reduced, people are still not leaving their own house that much. However, “non-essential” activities have gradually re-started: before Phase 2, only 13% of people went out to walk or play with children, while today (between 4 and 10 May) 29% do so. Moreover, there are many activities that people do way more now than during the first phase, such as outdoor sports activities (practiced first by 11% and then by 28% of respondents), going out to take care of a relative or friend (from 15% to 25%) and meeting people outside (8% to 21%). The vast majority of Italians, 83%, keeps going out mainly to buy essential goods (shopping or drugs), a percentage that has remained substantially unchanged compared to Phase 1 (81%).

PERCEIVED RISK ON PUBLIC TRANSPORTS – In this context of limited mobility, private cars were the preferred means of transport (63% of Italians), while public transport and car sharing suffered the most. Cars, together with bikes and the scooters, keep being perceived as the safest means of transport during phase two as well. According to the majority of Italians, public transport is less safe, even if people are re-considering the related risk now that the lockdown measures are being loosened: the perception of risk related to the usage of the metro improves by 20 points (from 88% to 68%); buses, trams and trains improve by more than 20 points. The fear of contracting the virus because of the car-sharing is also decreasing: from 55% to 35%. Of course, it is important to consider that this data points to the feelings of the very first phase after the re-opening: people feel “reassured” now compared to what they just went through during the first, and most critical, phase of the emergency. To understand if and how these feelings would improve even more, we would need to rely on future surveys and data collections. Certainly, communication will also have to find the right ways to inform about the new measures adopted and reassure citizens on how to properly use them.

PHASE 2 IS REASURRING ITALIANS – During the lockdown, the fear of contagion in certain public places was particularly high, but the easing of restrictive measures and the slow improvement of the contagion curve is reassuring many Italians. Hospitals remain at the top of the places considered at risk, with 66% of consents (in phase 1 they were 87%), followed by gyms (60%), cinemas and theaters (56% compared to 81% in phase 1) shopping malls (47% compared to 75%), bars and restaurants (44% compared to 72%), public services offices (37% compared to 64%) and supermarkets (32% compared to 59%). The perception of the risk of contagion also drops when it comes to museums, workplaces, banks, pharmacies and parks, which are already considered very safe.

HEALTH IS THE FIRST AND FOREMOST PRIORITY – In a very complex situation both in terms of health system and economics as it was “Phase 1” of the emergency, 65% of Italians believed it was more important to give priority to the health system, maintaining the limitations imposed by the lockdown in order to safeguard health, even if it costed facing a period of economic crisis. This opinion was particularly held by young people (73% of the 18-34 age group) living in the South or in the Islands (72%) and not currently employed (72%). On the other hand, 35% believed the priority was to safeguard the economy, and they were hoping people would have been able to travel and to re-start their activities, even if this could have been risky for public health. This opinion was shared by 44% of North East residents, 44% of people living in the North West, Lombardy excluded, and by freelancers (46%).

Already a week after the opening, the share of those in favor of ending the restrictions rises by two points (37%). A picture of a cautious and reasonable Italy, that has also a deep desire to start living again. 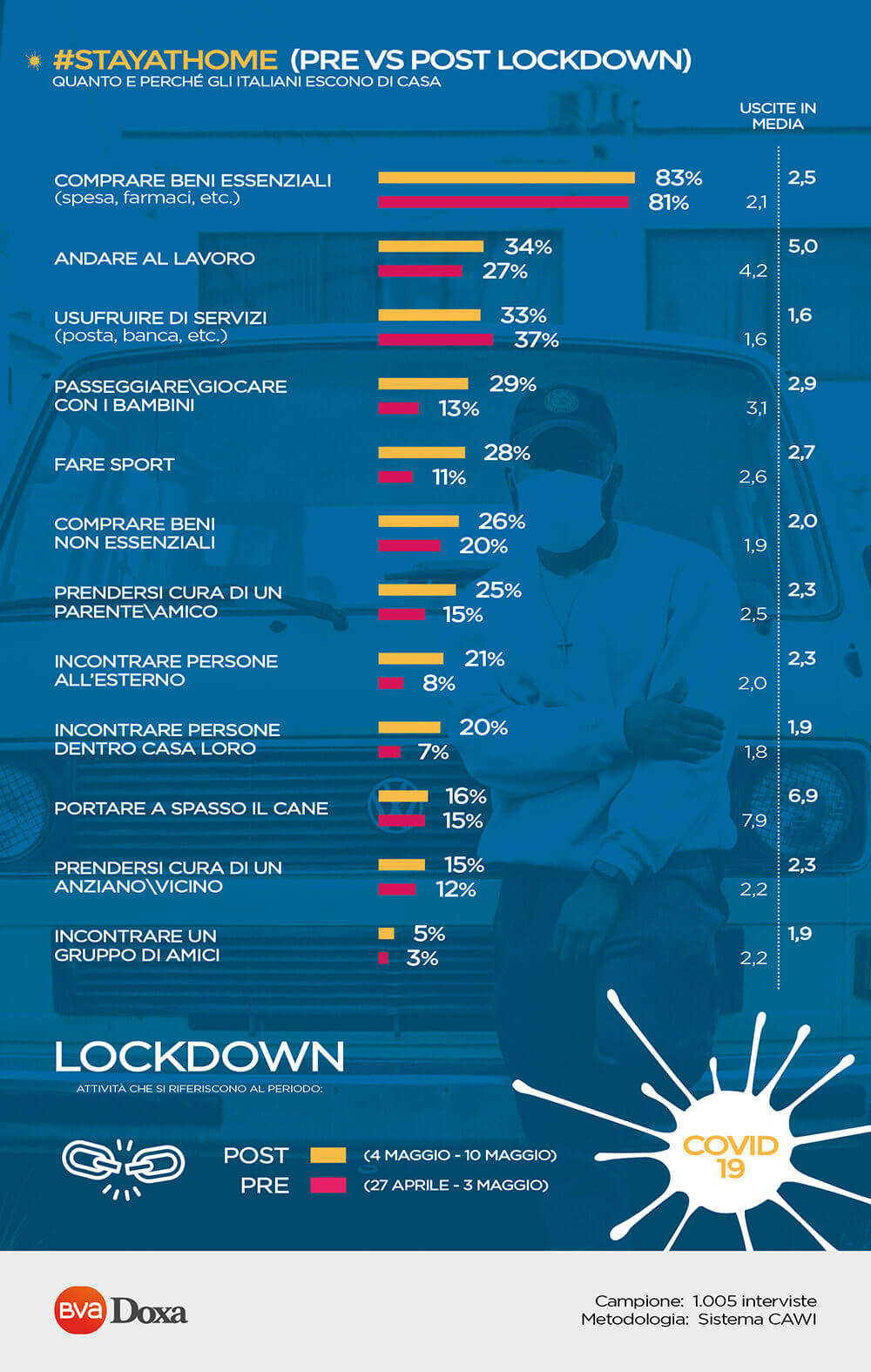 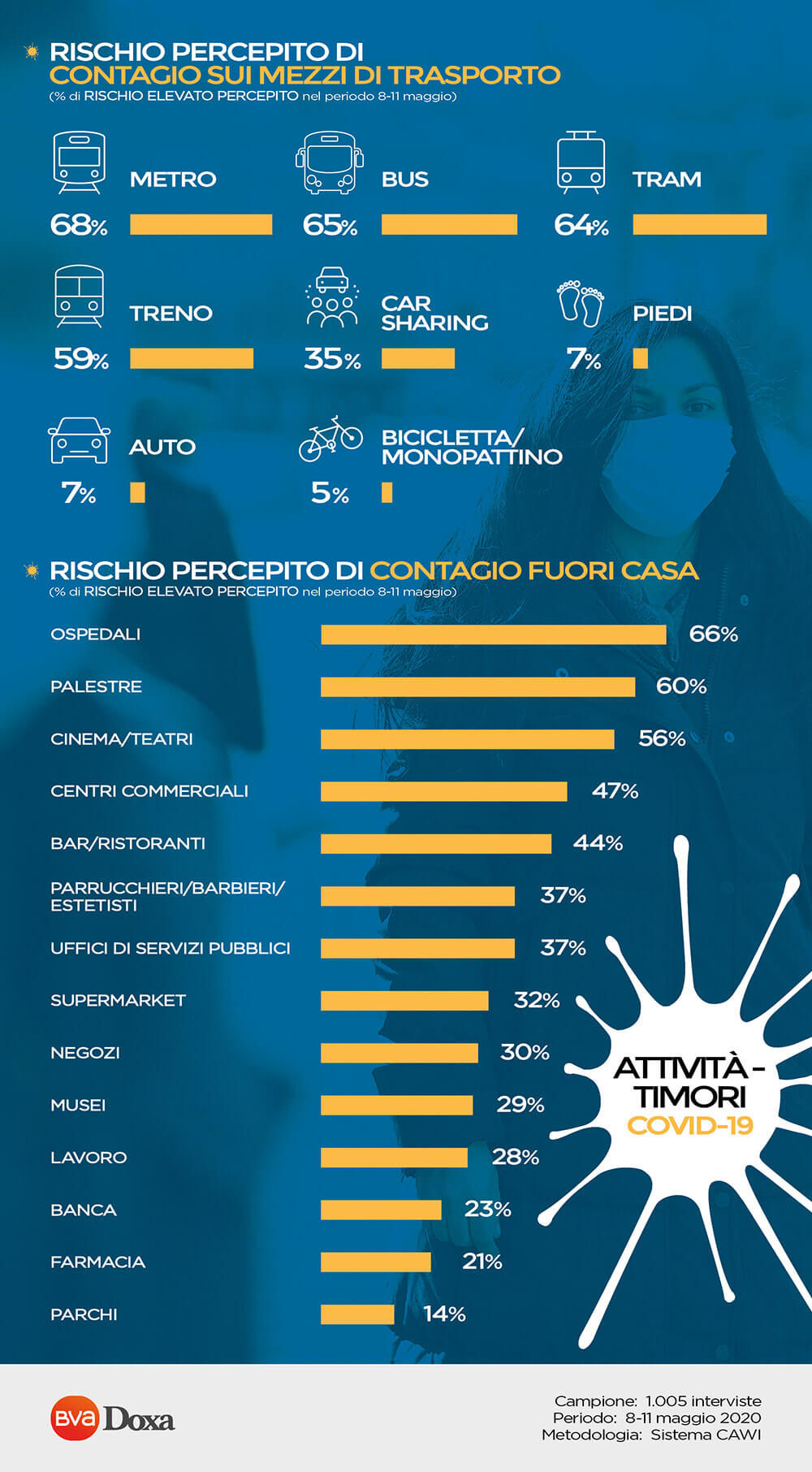