During the Covid-19 emergency, almost half of the working population keeps working and only 1 in 5 workers suspended the activities. In this unusual context, 70% of Italians expect a serious economic recession and more than half of the population worries about not being able to pay their next bills. In post-emergency times, attention will be mostly paid to these problems, rather than to environmental and green issues.

Italians spend their free time at home mostly by reading online news, watching TV or using social media and 70% experienced reading fake news. Newscasts, news websites and newspapers give the most reliable news, while WhatsApp and social networks are considered the worst source of information.

A record level of trust in the National Health System was observed (89%), as well as in hospitals, and in regional and national authorities but, on the other hand, trust in European institutions is wavering. Despite the shared fear, Italians reveal their most supportive side: 24% already donated to help the health system and 35% will donate in the next few weeks.

This is what the latest research conducted by BVA Doxa highlights on Italians’ opinions and predictions in Coronavirus times. The research focused on jobs, personal financial resources, information, entertainment, consumer behavior, trust, and donations.

The latest survey conducted in Italy by BVA Doxa on the impacts of Covid-19 virus on the Italian population revealed interesting trends: Italians are more concerned about the future of the economy and about their savings, more confident in the public health system, more likely to make donations and more careful about the quality of the news they read or listen to, especially online. The research – conducted on a representative sample of 1003 Italians from 20 to 24 March 2020 – focused on perceptions and fears, work, finance, media, entertainment, and online shopping, spending behavior, trust, and donations. The survey is the first wave of a weekly observatory that will keep analyzing a few trends and integrate others ad hoc over the weeks.

POST-EMERGENCY PRIORITIES: THE ENVIRONMENT COMES AFTER – On a scale of the most important values, green and environmental issues lose positions, undermined by concerns for more stringent problems. For more than half of Italians, environmental problems won’t be a priority once the emergency is over. Among these, 62% are families with children, which are mostly concerned about the ongoing crisis.

WORKING DURING THE EMERGENCY: BEING PRODUCTIVE FROM HOME – Half of the population keeps working, 19% of them is smart working now, but 1 in 5 workers were forced to interrupt their daily activities. 2 out of 3 employees believe their workload is the same compared to prior the crisis, while 28% believe they have actually more work to do now than before; 1 out of 3 experienced less workload compared to before the crisis, especially freelancers.  People who work from home are satisfied with smart working: 82% believes the technology is sufficiently supportive, and only a few respondents admit they don’t have the necessary tools to properly work from home.

In general, the majority of smart workers (72%) is just as focused at home as they feel at the office; the same cannot be said about parents: 34% of them are struggling to work from home. Once the emergency will be over, priority for companies will be the disinfestation of the buildings and to implement safety measures (66%), while also considering new products and services and organizational and structural changes.

ITALIANS FEAR ECONOMIC RECESSION – Covid-19 contributed to increasing economical fears and uncertainties. Almost 3 out of 4 Italians (63%) are worried about their savings, and half of the population (52%) fears that they won’t be able to pay their bills either. The fear of a serious economic recession with direct effects on families’ income is the strongest concern among Italians (70%), as well as the possibility of using their savings  to pay monthly expenses during the emergency months.

Italians worry a lot also about the financial strength of credit institutions (51%) and the possible impact on the quality of the relationship with banks and insurance companies (42%), which is a concern shared in particular by self-employed workers: 53% of these professionals fear that they won’t have adequate support from their bank.

Restrictive measures and forced quarantine had significant consequences on the activities carried out in free time. For example, reading activities such as reading online news (+ 71%), books (+ 43%) and newspapers or paper magazines (+ 35%) are increasing. In addition, TV-watchers increased (+ 67%), as well as people playing video games (+ 31%).

As for social media, 54% of Italians use them more often than usual, especially for making video calls with colleagues and friends (70%) and sharing emergency-related initiatives using the hashtag #iorestoacasa or participating in various flash mobs organized to cheer the days up (44%). However, social networks also hide potential pitfalls: 70% of the interviewees, in fact, admitted to having read an article or post on social media which turned out to be fake news. Among the news shared by different media outlets, the most questionable reliability entails news on WhatsApp and on social media which, on a scale from 1 to 10, gain a reliability score of 4.6 and 5.1 respectively. On the other hand, people seem to trust more newscasts (7.3), news websites (6.8), journals and magazines (6.6), which are all considered better sources of information. Political talk-shows are considered almost sufficiently reliable (mean of 5.6).

#STAYHOME, UNLESS FOR GROCERIES – Despite the current limitations, groceries is something that is still done in person by going to shops and supermarkets: 92% of the sample still goes to do groceries or asked for help from someone within their family. Only 8% of Italians uses only digital services and platforms to do groceries and buy staple goods. 63% of Italians buy provisions and settle for different brands from what they usually buy if they can’t find the right ones on the shelves (43%). However, 57% of consumers still chooses products in line with their brand loyalty. On the e-commerce side, a growing trend was detected in the food sector (+20%) and for pharmaceutical products (+16); on the other hand, clothes and accessories (-32%), electrical appliances and electronic devices (-25%) and self-care products (-20%) are decreasing.

Although 59% did not change their diet during the Coronavirus crisis, 41% of respondents changed their eating habits, in favor of more healthy choices. Some people eat healthier (11%), or try out new recipes (9%) and try to take more vitamins (6%). However, there is also a substantial part of the population (17%) who eats more just out of boredom or for not knowing what to do. With the closure of restaurants and public places, people are increasingly more preparing dishes entirely cooked at home: 44% of Italians have rediscovered the pleasure of home cooking. The majority of respondents (78%) believes companies should not stop their production and that they should continue to advertise and support sales and the economy.

TRUST IN NATIONAL HEALTH SYSTEM AND HOSPITALS, NOT IN THE EUROPEAN UNION – The coronavirus crisis highlighted the strength of the National Health System and the ability of the social and health workers of different regional hospitals to manage the emergency. 89% of Italians trusts the NHS and 83% trusts hospitals in their own region. On a political and institutional level, WHO (World Health Organization) is trusted by 76% of respondents, followed by regional governors (66%) and national government (60%). At the bottom of the ranking we find two European institutions, probably also considered the  well-known declarations of Christine Lagarde and weak European solidarity: the European Parliament (31%) and the European Central Bank (28%).

DONATIONS ON THE RISE – Italians are not only showing gratitude and emotional signs of solidarity, they are also contributing with concrete aid for the national health system: 24% of the population – almost 10/12 million Italians – claim to have already made a donation since the start of the Coronavirus emergency to support the healthcare and hospital sector. In addition, 35% say they want to make a donation in the upcoming weeks.

If we compare these data with the annual data published by BVA Doxa’s annual research “Italiani Solidali” – conducted on a representative sample of the Italian population aged 15 and over – there is an increase of about 30% compared to the amount of Italians who donate every year to scientific, health and equivalent research purposes, which amount to 8.3 million in 2019. 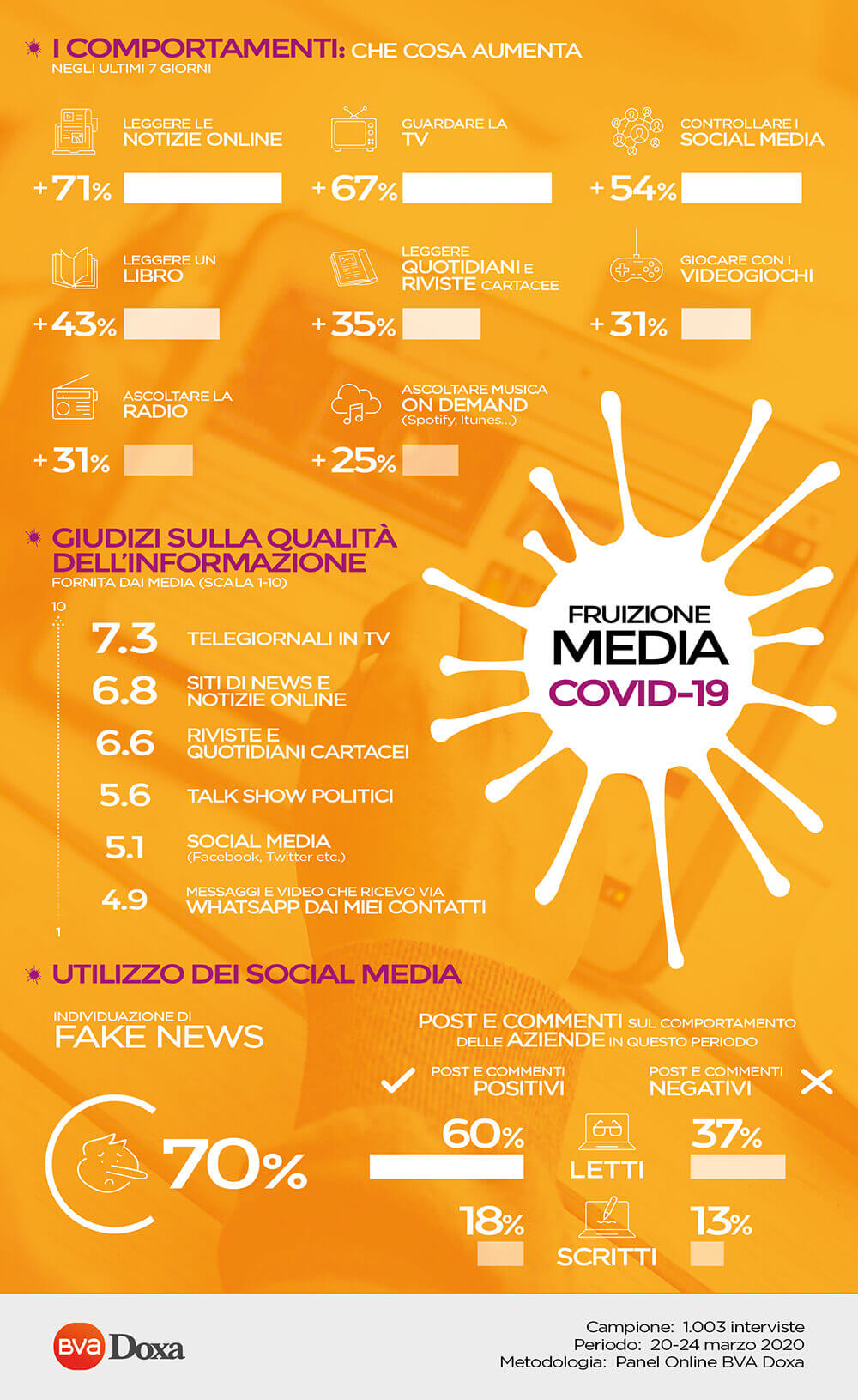 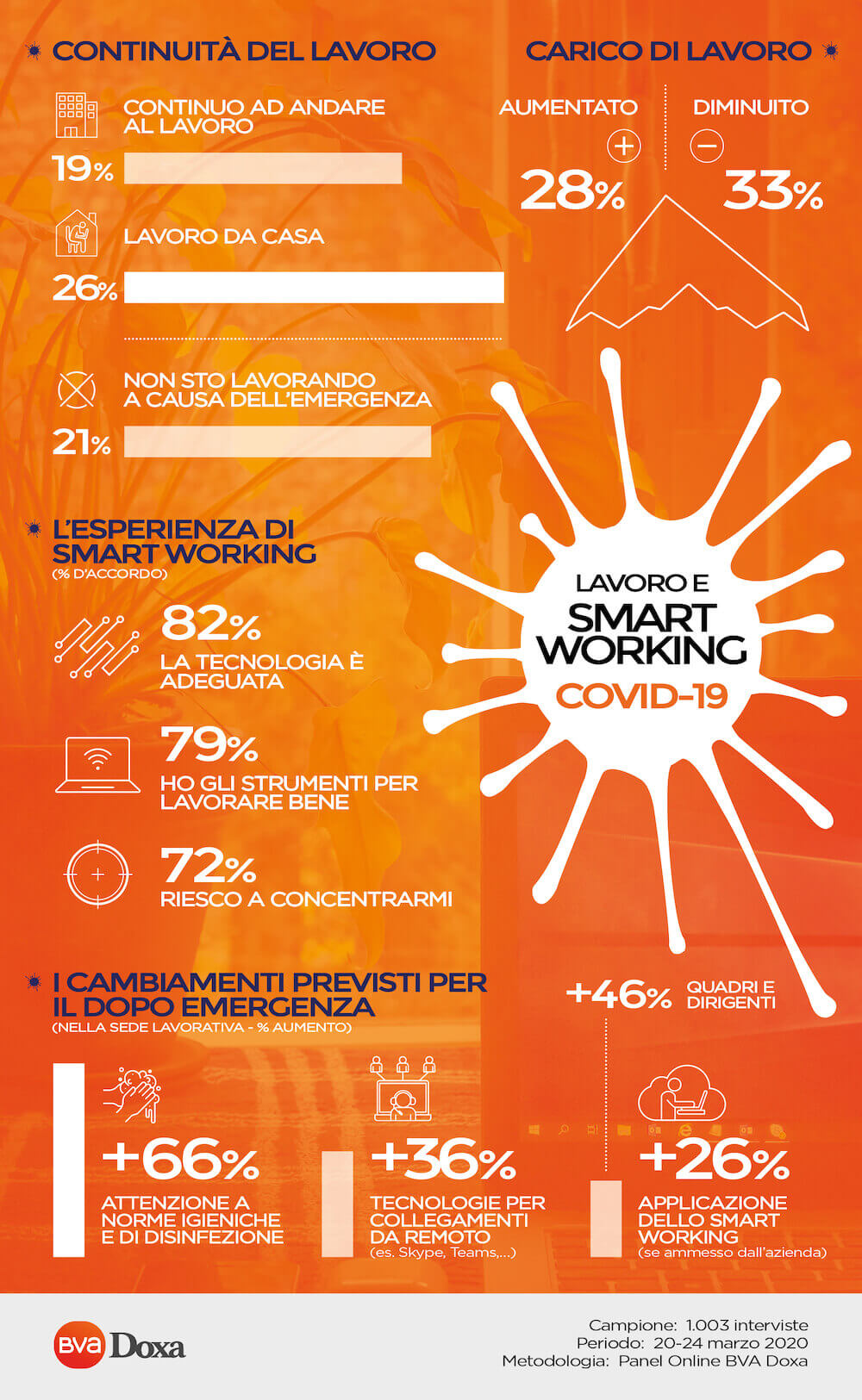 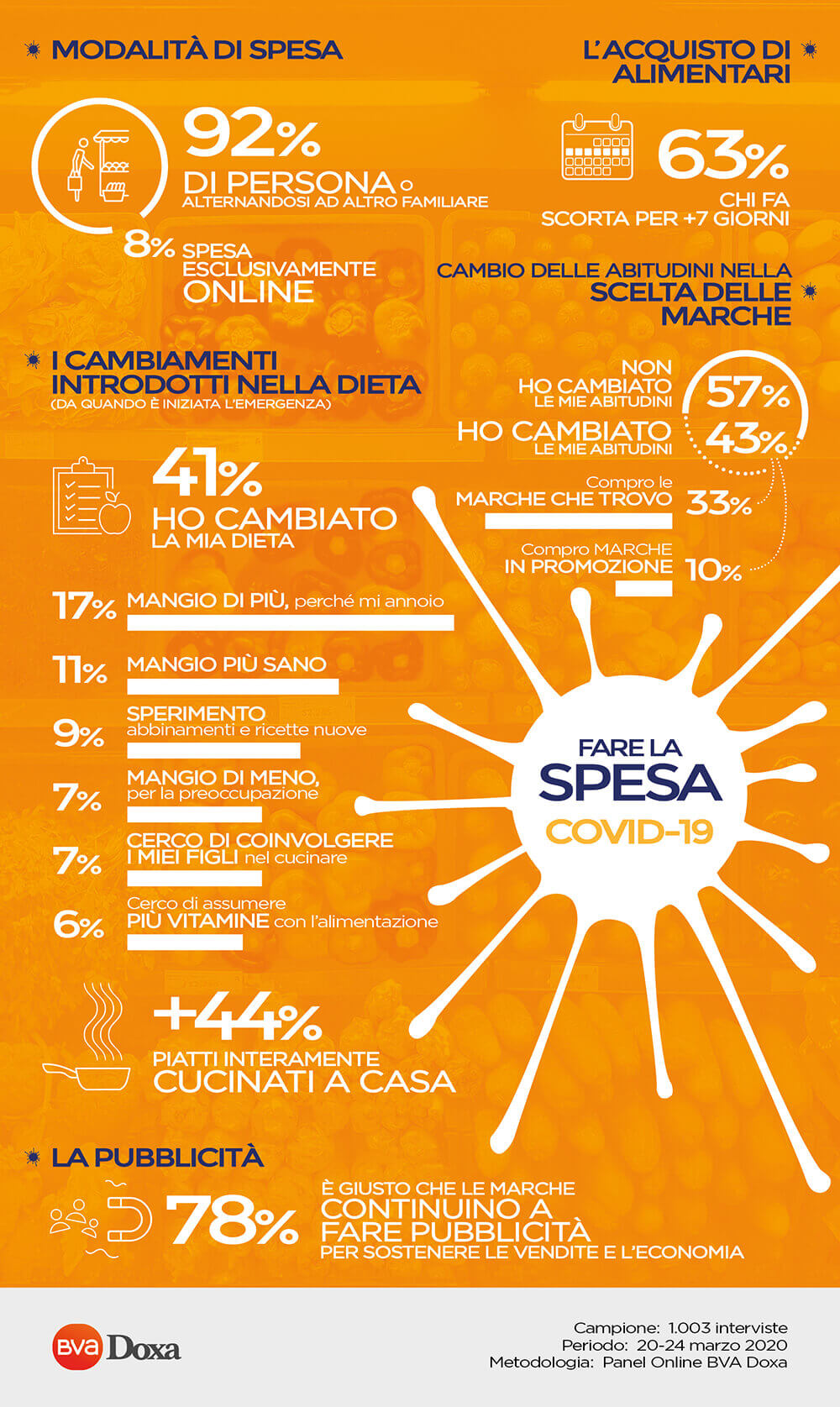 Free and fair elections and governance by the will of people are preconditions of a strong democracy, but only 37% of citizens living in the ...

During the latest wave of the European Opinion Tracker, the study conducted by BVA Doxa with the contribution of the international experts of the BVA ...

According to the latest results of the End of Year Survey conducted since 1979 by research institutes belonging to the Gallup International network, 43% of ...

Brand reputation and consumer initiatives are increasingly more decisive factors in choosing a brand. The relationship with consumers is fundamental: 83% of Italians, in fact, ...

Internships are considered a useful tool for training and entering the job environment, as well as particularly effective for receiving a job offer. This is ...

In Italy and Spain, a context where telephone and email continue to be the main communication channels between brands and customers, people are increasingly more ...

Next Generation Health: Italians’ Priorities for the Future Health System

Next Generation Health: Italians’ Priorities for the Future Health System

Digitization and new skills, access to care "beyond the hospital", greater uniformity and equity in healthcare provision throughout the country: Italian citizens seem to have ...

8/04/2020 Consumption, Finance, Lifestyle, Public Opinion, Retail, Society & Economy, Solidarity
Prev
Next
Please note that this website uses cookies to deliver our services to you, improve your experience and measure the usability of the site. By using this website you consent to their use. For more details, please read our Privacy Policy.