Italian Government developed an app, IMMUNI, which aims at tracing human contacts and possible COVID-19 infections: 95% of Italians have already heard about the IMMUNI app and 53% believe the app should be downloaded on a voluntary basis.

Among respondents, 71% believe the app would be a useful tool to contain the infection only if the majority of Italians would use it. If the Government will allow citizens to decide whether or not to download the app, 83% of respondents believe it won’t be widespread enough to actually be useful.

This is what emerges from the latest BVA Doxa research on the opinions and predictions of Italians in Coronavirus time; in its fifth wave, the study dedicated a focus on IMMUNI, the app developed by the Government to track the contacts and possible infections.

According to the latest BVA Doxa research on the impact COVID-19 is having on the Italian population, Italians already know the project involving the development of the app IMMUNI very well. Citizens in Italy believe the app should be downloaded on a voluntary basis, but there are still some concerns about the actual usefulness and about the privacy implications. The research – conducted on a representative sample of 1001 Italians in the period 24-27 April 2020 – has dedicated, among the various topics, a particular focus to IMMUNI, the app developed by the Government for contact tracing. The survey is the fifth wave of a weekly observatory launched on March 20 that keeps collecting data on a few trends and integrates some other ad hoc every week.

WHAT’S THE APP IMMUNI? – Italy recently entered the long-awaited “phase 2”: in order to keep the infection under control and to learn how to co-exist with the virus on a daily basis, the Italian Government decided to use an app for contact tracing to help to contain the infections. But how many Italians are aware of this project that will be launched in the upcoming weeks? BVA Doxa reveals that the vast majority of Italians, 95%, have heard of it, but not everyone has a clear idea of ​​what it actually is: among the ones who heard about the app, three out of five have some sort of ideas, while 36% admit they still do not know what it is.

OPTIONAL DOWNLOAD – Citizens have different opinions on the download: 53% believe that the app should be downloaded only on a voluntary basis, while 34% believe it should be an obligation for all citizens. For the remaining 13%, the entire project would be useless, and therefore the app should not be installed by anyone. Assuming everyone can decide whether to download the app IMMUNI or not, 67% of the respondents would install it on their smartphones, while 33% of “rejectors” would not.

MORE ON THE “DOWNLOADERS” AND THE “REJECTORS” – When looking at the two segments of the population, those who would download the app (the “downloaders”) and those who would rather not (the “rejectors”) no main differences in age, gender, and geographical area were detected. The majority would download the app, but different is the opinion of single people: three out of five people who are not in a relationship would download the app (61%), followed by families with children (68%), and couples without children (72%). Knowing the app implies a greater inclination to download it: more than half of the rejectors (52%) admit they don’t know how the app works.

BENEFITS: A USEFUL TOOL TO STOP THE INFECTION – When looking at the benefits of the app IMMUNI, 71% of the respondents believe that if the app would be used by many citizens then it would be a useful tool to stop the spread of the virus. However, to properly stop the infection we need to rely on everyone’s sense of civic duty: for 70% the app IMMUNI would help make people feel responsible for the whole society. There is less consensus on the role of the app in helping calming citizens: only 57% think that the application would make them feel this way.

DRAWBACKS: IF IT’S VOLUNTARY, IT WILL LOSE EFFECTIVENESS – IMMUNI‘s usefulness is closely linked to the monitoring of contagions and the mandatory nature of the app: 87% of Italians are convinced that in the absence of continuous monitoring, the IMMUNI app will be of little use, while 83% believe that without a mandatory download, only a few would install the app, making the whole project useless. Finally, protecting sensitive data worries 63% of Italians, according to whom the use of the app would result in a violation of their privacy. 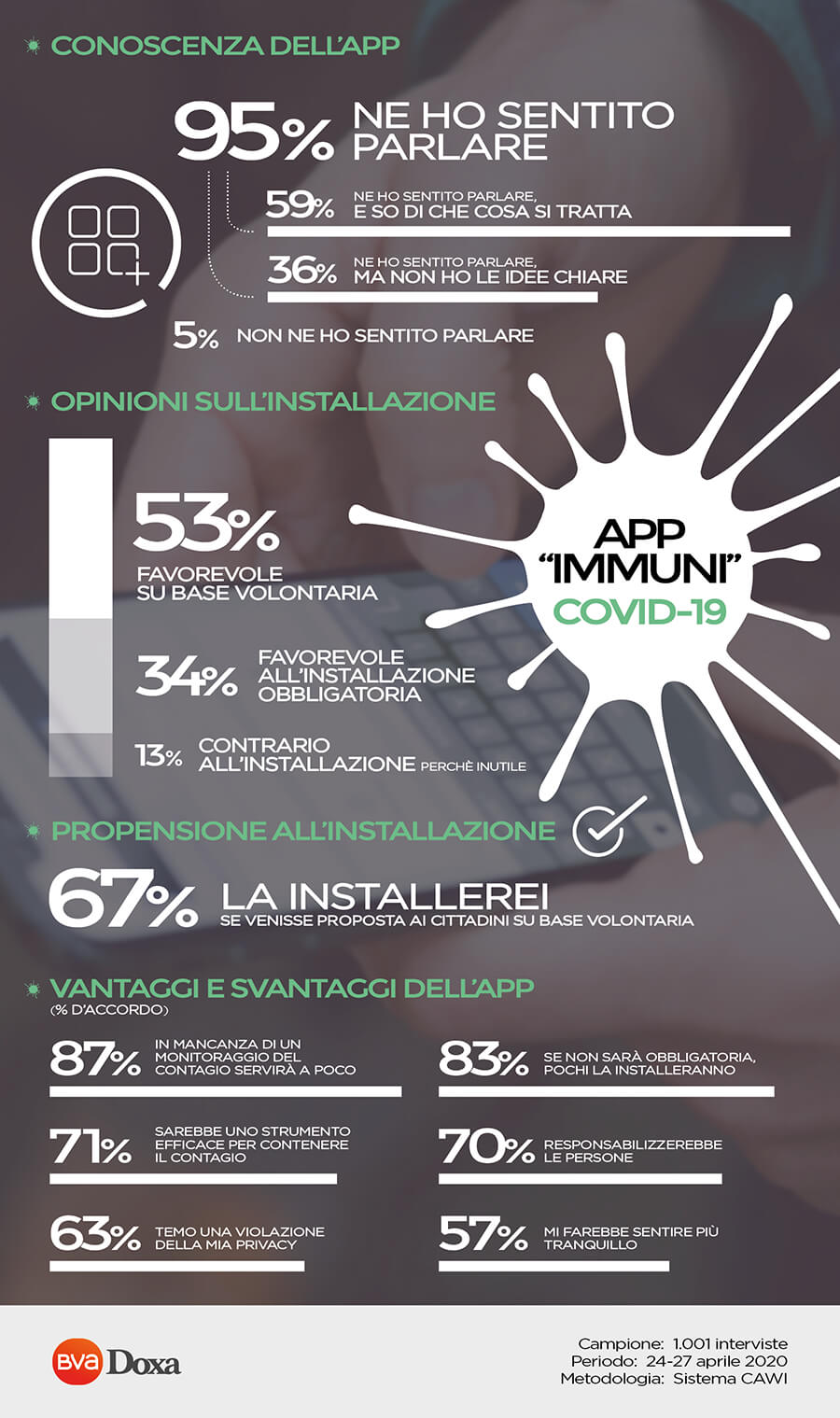